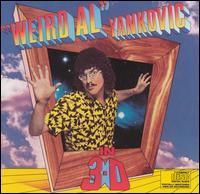 With an album behind him, Weird Al Yankovic makes much of the improvements expected of new artists when they get a second crack at a release a year later. He premieres the concept of his own band, basically well-trimmed types that looked good in music videos. They also play very well as a unit, so whatever image augmentation was accomplished is just a side benefit. While Yankovic's first album started off poorly and took awhile to build momentum, this one is like a garage door opening to reveal a shiny rocketship about to blast off. When it does, it is "Eat It," a satire of Michael Jackson's "Beat It" that can be considered the first kick in the rear the mighty gloved one received on his way down from the throne of pop music. Making the song a tribute to stuffing one's face with food takes away its phony edge of nastiness without removing any of its rhythmic power. In fact, this version rocks harder than the original, and Rick Derringer's solo in the middle cuts Eddie Van Halen to shreds. From there, it would seem the man is on a roll, but listeners may wind up stifling yawns all the way to the side-ending "Polkas on 45," Yankovic's first attempt at what evolved into a repeated device on subsequent albums, the extended, snappy polka medley in which an incredible variety of pop hits appear, sometimes for only a line or two. The fine musicianship of the leader and his associates is revealed in these performances, which tend to be some of Yankovic's best work. Playing medleys such as this is not easy, and doing it with such energy and wit is even more admirable. The original songs on this record are just as forgettable as any Yankovic had come up with so far. There is no chance of pleasing 11 year olds with any of the originals, despite the fact that many critics feel this is the level of mind Yankovic is aiming at when he gets in the songwriting mode. It is not that their age estimate is too high, either. No children of any age have expressed much interest in the original material here. The thematic thrust of In 3-D comes full circle with the hilarious "Theme From Rocky XIII," often known as "The Rye or the Kaiser." Once again the height of pomposity -- in this case, the character created by Sylvester Stallone -- gets knocked down to knee size by setting the action in a deli, round two probably consisting of a jar of pickles being opened. When this album is good, it is good enough to eat, so "Eat It" already. ~ Eugene Chadbourne, Rovi