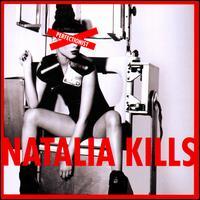 Nearly all teen pop stars turned serious recording artistes have something in their pasts they'd rather forget about. Whether it's Alanis Morissette's pre-Jagged Little Pill career as Canada's answer to Debbie Gibson, Robbie Williams' naked jam-spreading first video as part of Take That, or surely in a few years time, Justin Bieber's mop-top haircut, the music scene is littered with pop stars who started out in less than auspicious beginnings. The 24-year-old Natalia Noemi Cappuccini, aka Natalia Kills, is the latest act to face the difficult task of changing public perceptions, thanks to her early roles in critically panned BBC sitcom All About Me and middle-class radio soap opera The Archers, and her brief baseball cap-wearing bubblegum rap career under the guise of Verbalicious six years previously. But whereas Alanis and Robbie's progression from teenybopper to full-fledged singer/songwriter appeared natural and effortless, there's something a little too calculated about Kills' debut album, Perfectionist. Whether it's the 30-second intro, which features a robotic-sounding therapist detailing her alter ego's imperfections, its accompanying pretentious black-and-white online miniseries, or its transparent fascination with the darker side of life, Kills appears to be more concerned with proving that she's all grown up than actually producing any music to back it up. Indeed, there's no getting away from the fact that, despite all her protestations of uniqueness, she's about as close to a Lady Gaga tribute act as you can get. It shouldn't come as a surprise, considering that several of Perfectionist's producers (Martin Kierszenbaum, Fernando Garibay, Akon) have worked with the eccentric superstar herself, but even so, it's still startling just how much of the shimmering synth pop of "Wonderland," "Free," and "Superficial" appears to have been pilfered from The Fame Monster, while Kills' former broad Yorkshire tones appear to have somehow picked up her similar Americanized twang. Elsewhere, there are unashamed nods to other female chart-toppers including Rihanna (the gothic electro-R&B of "Zombie"), Nelly Furtado (the clattering Timbaland-esque "If I Was God"), and Kesha (the heavily Auto-Tuned "Nothing Lasts Forever"), but occasionally, Kills manages to avoid the overwhelming sense of derivativeness to create some pretty stellar pop. "Mirrors" fuses bubbling '80s synth pop basslines, stadium rock guitars, and an anthemic falsetto chorus on her most convincing performance as a feisty futuristic diva, "Break You Hard" is a ballsy, attitude-laden number lent an atmospheric air thanks to its sparse hypnotic rhythms, and "Not in Love" is an acid house-inspired slice of swirling electronica that provides a welcome respite from the album's constant floor-filling leanings. But although there's plenty of future singles on here, Perfectionist is far too formulaic and gimmicky to live up to Kills' obvious maverick intentions. ~ Jon O'Brien, Rovi