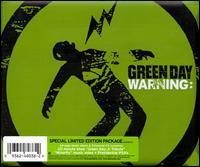 By 2000, Green Day had long been spurned as unhip by the fourth-generation punks they popularized, and they didn't seem likely to replicate the MOR success of the fluke smash "Good Riddance (Time of Your Life)." Apparently, the success of that ballad freed the band from any classifications or stigmas, letting them feel like they could do anything they wanted on their fifth album, Warning. They responded by embracing their fondness for pop and making the best damn album they'd ever made. There's a sense of fearlessness on Warning, as if the band didn't care if the album wasn't punk enough, or whether it produced a cross-platform hit. There are no ballads here, actually, and while there are a number of punchy, infectious rockers, the tempo is never recklessly breakneck. Instead, the focus is squarely on the songs, with the instrumentation and arrangements serving their needs. It's easy to say that Green Day have matured with this album, since they've never produced a better, more tuneful set of songs, or tried so many studio tricks and clever arrangements. However, that has the wrong connotation, since "mature" would indicate that Warning is a studious, carefully assembled album that's easier to admire than to love. That's not the case at all. This is gleeful, unabashed fun, even when Billie Joe Armstrong is getting a little cranky in his lyrics. It's fun to hear Green Day adopt a Beatlesque harmonica on "Hold On" or try out Kinks-ian music hall on "Misery," while still knocking out punk-pop gems and displaying melodic ingenuity and imaginative arrangements. Warning may not be an innovative record per se, but it's tremendously satisfying; it finds the band at a peak of songcraft and performance, doing it all without a trace of self-consciousness. It's the first great pure pop album of the new millennium. ~ Stephen Thomas Erlewine, Rovi