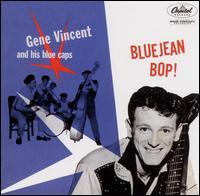 Gene Vincent's very first album, cut in June 1956, was a rushed affair -- which is obvious from the haphazard song selection -- but manages to be one of the most exciting LPs to come out of the early rock & roll era, rivaling Elvis Presley's first two albums, which date from the same period. Its virtues, which is to say, the virtues of Gene Vincent and His Blue Caps as high energy rock & rollers, transcend the lack of quality songs on the album -- the title hit is joined by some rocked up standards ("Lazy River," "Peg O' My Heart," and "Ain't She Sweet," which the Beatles picked up in their early repertory by way of Vincent, and made their first vocal recording five years later), a country ballad ("Wedding Bells") or two, and some hastily written rave-ups ("Jumps, Giggles and Shouts," etc.), little of it high-grade rock & roll material in and of itself. As it turned out, Vincent and his band didn't need first-rate songs to produce great rock & roll -- they rise to the occasion here, throwing the hard rocking numbers into the air like the musical equivalent of jitterbug dancing, or stretching out elegantly on the handful of ballads, and the result is one of the few truly virtuoso rock & roll albums of the era. What sets Bluejean Bop apart from Elvis' albums, in particular, and most other white rock & roll of the period, is that it has the tight sound of an actual working band, where Elvis' (and most other white rock & rollers') albums, in particular, almost inevitably featured session players whose presence helped make for an idealized recording, but not a good representation of how they sounded on stage -- which is what rock & roll was really about. Vincent and company, by contrast, were playing shows virtually every night during the period of these sessions. The sessions themselves were done in a hurry, without any help from studio musicians; and they were conducted with minimal input from producer Ken Nelson, who pretty much let the band do what came naturally. The result is a lean, tight sound, akin to a live recording -- which this practically was -- in terms of minimal retakes, lots of spontaneity, and no overdubbing. Bluejean Bop was reissued in 1998 by Collectables Records, paired off with Vincent's next album, Gene Vincent & His Blue Caps, on the same CD, as Bluejean Bop/Gene Vincent & His Blue Caps. ~ Bruce Eder, Rovi