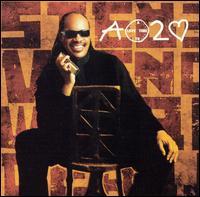 A Time to Love

During times of extreme political and social change, Stevie Wonder's voice and songwriting served as cultural and spiritual guideposts to many a listener, often lending insight and a barometer with which to measure the ways of the world. But that was largely during the golden phase of his career, generally regarded as being the late '60s through 1980's Hotter Than July. His work in the mid-'80s through the '90s was marginal in comparison, only hinting at glimpses of former brilliance, sugar-coated by over-polished production and radio-friendly content. So with a decade passing since his last full-length, 1995's Conversation Piece, people waited with bated breath for a sign of his return...and wondered which Wonder would show up: would it be the socially conscious genius who wrote anthems for a generation, or the R&B crooner who dominated quiet storm radio? Thankfully, it's a blend of both. For every forward-moving song with a theme, there's a gentle moment of tranquility to cancel it out. Many of these songs, save for their warm and polished digital production values, could have easily found a home in Talking Book, Music of My Mind, or any of the other albums for which Wonder will forever be praised. In an age when the majority of R&B is about money, drugs, infidelity, or getting it on, Wonder's lyrics (especially during the love songs) recall the simplicity and innocence of early Motown without sounding trite. It's definitely a refreshing change of pace and hopefully something one or two aspiring producers and songwriters are paying attention to. These are love songs of maturity that are carefully crafted, which would more or less explain why it took nearly a decade to get them finalized, with many of them feeling like mature revisitations of the classics. (If "Happier Than the Morning Sun" and "Little Girl Blue" were a pair of teenagers in love, "Sweetest Somebody I Know" is that couple 30 years later at its class reunion.) The jazzy "How Will I Know," featuring Wonder's daughter on lead vocals (the same Aisha sung about nearly 30 years ago on "Isn't She Lovely"), is the gateway to the album's second half, a five-song cycle of ballads and quiet storm jams that will appease fans of Wonder's later work. Especially notable is "My Love Is on Fire," featuring a beautiful guest appearance from jazz flutist Hubert Laws, which exemplifies the other thing that makes A Time to Love the comeback album of the year: the never-ending list of celebrity cameo appearances so extensive it would make Carlos Santana and Clive Davis blush with modesty. Guest appearances from rap pioneer Doug E. Fresh, Bonnie Raitt, Sir Paul McCartney, Kim Burrell, Prince, Kirk Franklin, and India.Arie just scratch the surface of who contributed to this record. It's one Michael Jackson and one Lionel Richie cameo short from being a USA for Africa reunion. But while each artist lends his own style to the mix, the songs definitely remain 100 percent Wonder thanks to his distinctive singing and arrangements. The album begins its landing with "So What the Fuss," a chunky block of funk with a distorted bassline. It served as the lead single and was met with surprisingly little fanfare, especially since it's one of Wonder's most straight-ahead slices of funk in some time. And the album's title track serves as a fitting conclusion to the album, spreading Wonder's message of love and peace as strongly and convincingly as any other song he's ever done. On the whole, A Time to Love is the record Wonder fans have been waiting for, and the wait has more than paid off. Through exploration and balance, A Time to Love finds the two halves of Wonder's adult career finally coming to home to roost in peaceful harmony with one another, and it's one of the finest records he has done in decades. ~ Rob Theakston, Rovi