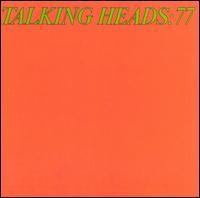 Though they were the most highly touted new wave band to emerge from the CBGB's scene in New York, it was not clear at first whether Talking Heads' Lower East Side art rock approach could make the subway ride to the midtown pop mainstream successfully. The leadoff track of the debut album, Talking Heads: 77, "Uh-Oh, Love Comes to Town," was a pop song that emphasized the group's unlikely roots in late-'60s bubblegum, Motown, and Caribbean music. But the "Uh-Oh" gave away the group's game early, with its nervous, disconnected lyrics and David Byrne's strained voice. All pretenses of normality were abandoned by the second track, as Talking Heads finally started to sound on record the way they did downtown: the staggered rhythms and sudden tempo changes, the odd guitar tunings and rhythmic, single-note patterns, the non-rhyming, non-linear lyrics that came across like odd remarks overheard from a psychiatrist's couch, and that voice, singing above its normal range, its falsetto leaps and strangled cries resembling a madman trying desperately to sound normal. Talking Heads threw you off balance, but grabbed your attention with a sound that seemed alternately threatening and goofy. The music was undeniably catchy, even at its most ominous, especially on "Psycho Killer," Byrne's supreme statement of demented purpose. Amazingly, that song made the singles chart for a few weeks, evidence of the group's quirky appeal, but the album was not a big hit, and it remained unclear whether Talking Heads spoke only the secret language of the urban arts types or whether that could be translated into the more common tongue of hip pop culture. In any case, they had succeeded as artists, using existing elements in an unusual combination to create something new that still managed to be oddly familiar. And that made Talking Heads: 77 a landmark album. ~ William Ruhlmann, Rovi