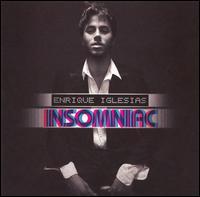 Insomniacs, of course, can't sleep, so they stay up all night -- and who better to provide a soundtrack to sleepless nights than Enrique Iglesias, the heir to the Latin loverman throne that his father Julio claimed in the '80s. Unlike his dad, Enrique became a global superstar at a relatively young age, and he also came of age in an era that's decidedly flashier than Julio's, so even if he shared a taste for corny romantic ballads with his father, he had a far hipper persona than his dad, and nowhere is that more evident than on 2007's Insomniac, his fourth English-language album and first to really be pushed to a younger audience. Sure, there's a surplus of slow-burning romantic ballads, but Insomniac also has a stylish shimmer designed for clubs and even those slow tunes can get down and dirty, as on "On Top of You," which is every bit the sub-R. Kelly bump-n-grind the title indicates. But Enrique is too much of a crossover guy to spend the entire album doing the nasty -- he's sharp enough to spend just enough time to give the impression that Insomniac leans toward that sleek, sexy club sound, but loads up the rest of the record with songs that can fit into smooth pop radio stations the world over. Sometimes, he pushes too hard in either direction -- complete with a Lil Wayne cameo, the dirty-dancing anthem "Push" (as in "push push/back upon it/don't stop until the morning") tries way too hard and has the opposite effect as intended, while some ballads drown in syrup -- but sometimes Iglesias strikes the right balance between crossover pop and stylish retro-new wave production, as on "Stay in Tonight," a tune that's sleek and propulsive but not edgy, a tune that could have fit into adult contemporary pop radio at any time since the late '80s, and Sean Garrett's production on "Do You Know? (The Ping Pong Song)" is the inverse, sounding tailor-made for the moment of its release. Both are similar in one regard: they're the kind of song that works for Enrique because it glides by on its sound and doesn't rely on him to do the heavy lifting, either as a singer or a seducer. But what works on this slick, snazzy makeover is what always works for him: the ballads and the middle-of-the-road pop tunes. They may not be hip, but they're part of the family tradition, and when he sticks to them, he's as good as ever. ~ Stephen Thomas Erlewine, Rovi