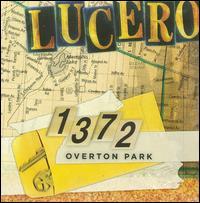 1372 Overton Park might be Lucero's major-label debut, but the Memphis-based band retains all of their rough-and-tumble indie charms. Gruff-voiced frontman Ben Nichols still sings about people with dead-end lives: the type of characters whose "heroes are the losing kind." But Nichols definitely finds ways to make these troubled souls compelling. The disc starts off with a powerful quartet of hard-rockin' tunes about hard-livin' folks. The album opener "Smoke" plays like a darker version of "Born to Run." Instead of kids holding onto some hope that they can escape to something better, the couple in "Smoke" are two pretty hopeless people "running out of time" and looking to "just get out alive." The Replacements-ish "What Are You Willing to Lose?" talks about trying to persevere when you're "going down in flames." It also introduces Nichols' backhanded sense of romance when the protagonist tries to win over a girl with an "I'd try to make you hate me just to try and make you mine" approach. "Sounds of the City" offers a slightly more upbeat attitude to romance. The album's most rousing track finds Nichols sweet-talking a girl ("all these streets lead me always back to you.") although he really just needs "something to believe (to) take away the pain." He slides back toward a more nihilistic point of view in "Can't Feel a Thing," which contains the great anti-romantic line: "She asked me if I loved her and I showed her my tattoo."

As if it hasn't been evident on earlier efforts, this disc demonstrates how Lucero, along with bands like the Hold Steady and Marah, blend together Replacements raucousness and Springsteen streetwise storytelling, and create something both familiar yet also unique. Throughout the album, Nichols spins colorful tales of lost youths ("The Devil and Maggie Chascarillo") and downtown desperadoes ("Johnny Davis") that are vividly detailed. He is also very capable at dialing down the mischievous misadventures and expressing some truly honest emotions. The album's second half is highlighted by these quieter numbers. The bittersweet love song "Goodbye Again" ranks up there with the work of Warren Zevon, as Nichols essays a tumultuous relationship where the man isn't strong enough to cut ties with a girl whom he knows isn't good for him. "Darken My Door" and "Hey Darlin' Do You Gamble" are two twangy tunes that again pick up Nichols' less-than-sunny view of love and relationships. In both "love" songs, the protagonist pleads for a girl to "take a chance on" him, and that love is more of a gamble than a sure thing. While the disc begins with a blast of "Smoke," it concludes more contemplatively with "Mom," a moving ode to a mom that's both an apologia and a thank you. Nichols' ability to bring a realness to the characters in his wild, rocking story-songs, as well as his lower-key, more intimate tunes, goes a long way in making these songs connect with the listener.

Although Nichols' lyrics and vocals draw obvious attention, the rest of band contributes mightily to creating this marvelous album. Brian Venable serves up powerful riffs and his Southern rock stylings propel the funky "Sixes and Sevens." Rick Steff fills out the band's sound wonderfully whether he's playing organ or piano, and the rhythm section (drummer Roy Berry and bassist John C. Stubblefield) particularly helps to pull the unruly rockers together. Producer Ted Hutt keeps the band's sound loose but focused, and the use of horns (arranged by Memphis' own Jim Spake) also serves to enhance the songs' energy, while also more deeply rooting the music in the band's hometown sound. Lucero's scruffily sublime major-league debut won't disappoint their faithful fans and should help spread the word about this underrated band. With its captivating set of beer-stained rockers and heartfelt ballads, 1372 Overton Park offers a triumphant example of gritty, sweaty, all-American music. ~ Michael Berick, Rovi