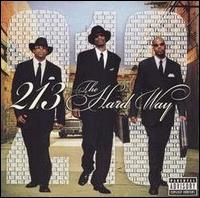 Long rumored and much anticipated, The Hard Way reunites three of the West Coast's top rap artists -- Snoop Dogg, Warren G, and Nate Dogg -- and results in one of the most enjoyable albums to come from any of them to date. Know first, however -- if you don't already -- that 213 isn't just another of Snoop's many side projects; this is a full-fledged reunion. Way back in 1990 or so, these three superstars were young pups and decided to start a rapping-and-singing group. The Long Beach youths named it after their area code, 213 (which also comprised Los Angeles, Compton, Watts, and Carson), and a legend was born. Of course -- to make a long story very short -- Snoop shot to stardom alongside Dr. Dre soon afterward, and Warren and Nate quickly found success themselves with their duet "Regulate." And that was the end of 213. Fast forward a dozen years, and while Snoop remained as popular as ever, Warren's and Nate's solo careers were barely afloat. The gold they'd struck with "Regulate" had long since run dry. So it made sense for them to team up with Snoop again, and even a cursory listen to The Hard Way indeed affirms that. Simply put, this is the most enjoyable album of Warren's and Nate's careers to date, by a long shot, and it's among Snoop's most enjoyable as well. Warren and Nate are both talented, but neither can carry the weight of an entire album by himself like Snoop can, so they benefit greatly from the team effort here. Snoop and Warren contribute at least a verse each to every song, and Nate usually delivers the hooks as well as some melodies and bridges. It's a perfect formula: Snoop plays the fool, interjecting his patented ad libs left and right and delivering first-rate raps every go-round; Warren hasn't sounded this confident in years, if ever, rapping tougher and more gangsta than usual and rising to the heightened occasion wonderfully; and Nate, who had become a token hitmaking hook-singer by this point, has never sounded like such a natural fit. And too, these guys have a great batch of songs to work with here. Almost every song is hand-delivered by a different producer, many of whom are fresh-sounding newcomers, and all contribute trademark G-funk jams. The few name-brand productions stand out most: DJ Hi Tek's album-opener, "Twist Yo Body"; DJ Pooh's lead single, "Groupie Luv"; and Kanye West's good-natured ballad "Another Summer." Comedian Dave Chappelle's hilarious cameo on "Rick James Interlude" is also a highlight, especially considering the release of The Hard Way came about a week after the funk legend's passing away. And don't forget the album closers: "Appreciation" is a retrospective heart-tugger that is quite touching as well as a standout musically, and lastly "So Fly," the previously released mixtape send-up of Monica's "So Gone" that inspired this long-overdue reunion in the first place. Plus, if that's not enough, the remaining songs are generally above average, leaving very little filler on this 69-minute, fun-filled disc. ~ Jason Birchmeier, Rovi