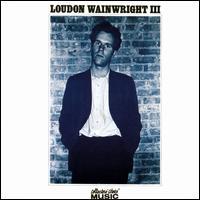 This LP introduces the singer who carries one of the most misspelled names in the songwriting business. Either addressed as Louden Wainwright or Loudon Wainright on concert tickets and file cards in CD stores, it would eventually inspire him to come up with a very funny song on the subject: "T.S.M.N.W.A.," on 1993's Career Moves. After getting to know him better through listening to this superb live album, a logical next step would be to turn to his first two albums. At the time he released the first one under his seemingly awkward name, critics were standing in line to hail him as the new Bob Dylan. In 1970, Loudon Wainwright III (or Album 1, as it is also referred to) was a promising debut of a newly arrived songwriter, they all agreed. This kind of accolade earned him a spot at many a folk festival, but at the same time he would be criticized for not writing politically enough. Even to the amiable Wainwright, this must have seemed paradoxical for, like most beginning artists, he never asked to be called the new anything in the first place. Trying to make a comparison between him and any of his songwriting peers is pointless. His quality lies in the unique way he comments on ordinary events happening in -- and outside of -- his personal life. Depending on the mood of the song, he delivers them in a melancholic, at times even regretful, voice -- but he's also capable of being outright sarcastic.

On his first album, the content is still largely poetic. From the beautifully depressing "Hospital Lady" and "Central Square Song" to the uplifting protest song "Uptown," this is a songwriter at an early stage in his career and determined to make a difference. With album opener "School Days," he succeeds in a most charming way: It's an account of the promise of youth in which an adolescent Wainwright boasts of all the important things he accomplished during high school. Considering a line like "In the spring I had great hunger/I was Keats, I was Blake/My purple pencil pains I would bring/To frogs who sat entranced," who could possibly blame him? However, Wainwright's at his best when he's sardonically spitting (rather than singing) from the top of his toes, addressing people who think they know the answer or the way. Try "Four Is a Magic Number" or, even better, the exceptional "Glad to See You've Got Religion." Thankfully, this trademark delivery would accompany him on many more albums to come. ~ Quint Kik, Rovi