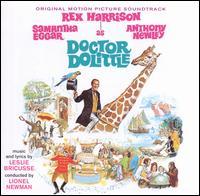 Leslie Bricusse wrote the songs and the screenplay for the movie musical adaptation of the stories of Hugh Lofting about the fictional Dr. John Dolittle, a 19th century British veterinarian who could, as one of Bricusse's songs put it, "Talk to the Animals." Doctor Dolittle was years in the making and very expensive, and when it arrived in theaters for Christmas of 1967, it proved to be an expensive failure for 20th Century-Fox. The bath that the studio took because of the budget has tended to obscure other aspects of the film, in particular the score as heard on the soundtrack album, which appeared months before the movie. Bricusse provided a tuneful bunch of songs carefully suited to his stars, beginning with Rex Harrison. Harrison had not been considered a musical star until My Fair Lady, for which he developed a style of singing that was more like rhythmic, somewhat musical speaking. Bricusse, like Alan Jay Lerner and Frederick Loewe before him, wrote for that limited, if expressive instrument on such songs as "The Vegetarian" and "Like Animals." As a result, Harrison as Dolittle sounded like a slightly kindlier version of Professor Henry Higgins from My Fair Lady, especially in the closing song, "Something in Your Smile," which owed a lot to "I've Grown Accustomed to Her Face." Bricusse was no less effective in providing material for second lead Anthony Newley, an old partner of his with whom he had written Stop the World -- I Want to Get Off and The Roar of the Greasepaint -- The Smell of the Crowd. Newley was serving only as performer, not collaborator here, but Bricusse knew how to write for his voice, and even in an unlikely Irish accent, Newley was in his element belting out songs like "After Today." Samantha Eggar, the female lead in the film, had her singing voice dubbed by Diana Lee, and even though the movie featured a mixture of Eggar speaking and Lee singing in the songs, Lee re-recorded Eggar's dialogue for the soundtrack album, so that the actress was not heard at all on disc. Lee was good in a limited role, but the score really belonged to Harrison and Newley. And the soundtrack actually did much better than the movie, going gold and producing the year's Oscar-winning song, "Talk to the Animals." It may be that all that was wrong with Doctor Dolittle was that it was turned into an overpriced film instead of a stage musical. (Of course, on-stage there would have been the problem of all those talking animals!) ~ William Ruhlmann, Rovi