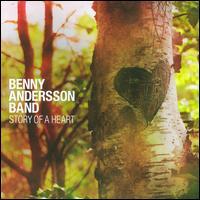 Story of a Heart

ABBA fans will have an opportunity to get a sense of what one of the band's principals, Benny Andersson, has been up to over the past 20 years with the release of this compilation of tracks by the Benny Andersson Band outside Sweden. The group is a 16-piece unit including two singers, Helen Sjöholm and Tommy Körberg, as well as four strings, a couple of brass, a couple of reeds, two keyboards (one of them Andersson), an accordionist, and a guitar-bass-drums rhythm section. That's enough instrumentation to allow the composer to indulge his eclectic tastes, which, as could be heard over the course of ABBA's catalog, embraced everything from classical music to multiple styles of pop. Andersson's heart may be not so much in Stockholm as in Vienna, given his love of waltzes and Medieval European sounds. But that's only the beginning, as he veers from Tin Pan Alley pop and ‘20s jazz to elements of country, ‘50s rock & roll, and other genres, sometimes in the same track. Of the 14 selections here, only five have vocals, and of those five, only one, the newly written title song, directly evokes ABBA. In fact, "Story of a Heart," with its powerful female vocal from Sjöholm and killer chorus, could be slipped onto an ABBA album almost without anybody being the wiser. As the other 13 tracks demonstrate, however, that's only one of Benny Andersson's talents as a composer. ~ William Ruhlmann, Rovi