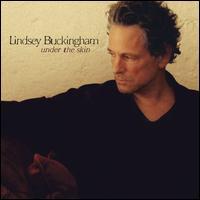 Lindsey Buckingham has released only four albums as a solo artist in 25 years. While he remains active as a producer and session musician, this is his first offering in 14 years. Those who saw Cameron Crowe's film Elisabethtown got a sneak peak: Buckingham's "Shut Us Down" was featured in the film. Under the Skin is perhaps the most nakedly visible and tender recording he's ever dropped. He wrote much of the set while on tour with Fleetwood Mac in 2003. While it's true his albums are deceptively simple in terms of their production values, there are always many layers whispering beneath the surface. This is the sound of that underside. Buckingham employs largely acoustic guitars on this set, and with the exception of the Fleetwood Mac rhythm section helping out on "Down on Rodeo" and some orchestration by David Campbell on "Someone's Gonna Change Your Mind," he mostly allows the acoustic guitar to carry his impeccable sense of rhythm and time. There are a few covers on the set as well, a completely re-invented version of the Rolling Stones "I Am Waiting," and Buckingham's own unique reading of Donovan's "To Try for the Sun." The themes of these tunes underscore a loose thread that seemingly runs throughout the album; that of anticipation, holding out despite evidence that you shouldn't, and the disillusionment that comes with having ambitions and dreams thwarted. Almost all of these songs feel autobiographical. Take the opener "Not Too Late," where he plays plectrum style to the point where his guitar is almost completely glissando. Its beautiful cascading notes stand in stark contrast to the melancholy lyrics that discuss his frustration at his solo career despite what's written about him, and he wonders whether or not he's fooling himself. It's a striking beginning, one that looks at dreams as perhaps just that, except for the childlike character in his own heart that speaks to the other side of that argument. On "Show You How," a shimmering little rocker, a man is speeding through life grabbing what he can and disappearing in the process; while a loved one exhorts him to slow down in order to see what his life is like. The words are simple, the images come from everyday life, but the razor is fine and sharp.

The title track is a gorgeous love song that speaks not to restlessness but to providing comfort for the Beloved's hurt and frustration. Multi-layered acoustic guitars play in harmony, strumming and creating a different kind of glissando effect. Other cuts that stand out are the covers, and "It Was You," that features one of those melodies that came pouring out of his songs with Fleetwood Mac. It's a multivalent pop song whose melody is instantly memorable yet quirky. That it's a song of gratitude for found love is something rooted in reality, not the illusion of dreams. It's also about the benefit of waiting for that which is most fulfilling. "Cast Away Dreams" is another one of those Buckingham moments where acoustic guitars and a voice coming from the ether relate a tale of travel from disappointment and the dissolution of falsehood. It celebrates what's real no matter the price that needs to be paid. Buckingham's voice emerging from a warm palace of reverb underscores the faraway feeling, one of transit and emergence into another space. And, of course, there is the acoustically drenched "Shut Us Down," that is so profound lyrically, it needs to be heard. For whatever reason, Buckingham has stood on the margins despite the legend that is Fleetwood Mac. Anyone who gives his own recordings a chance will find in spades that it is his songs, his sounds, and his arrangements that brought them to the pinnacle of popularity. Buckingham is a rare kind of songwriter: he can appeal to cognoscenti like critics, other musicians, and astute listeners alike, but he also has that mercurial ability to translate to those who look to music for both sentiment and emotional fulfillment rather than study technique and method. Under the Skin, like his other recordings, can provide both satisfaction and perhaps even wonder to any listener willing enough to give it a chance. It is, thus far, his masterpiece, and as beautiful a pop record as can be made these days. ~ Thom Jurek, Rovi