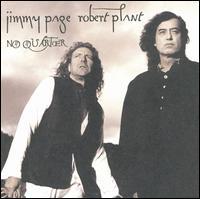 Ever since Led Zeppelin parted ways after the death of drummer John Bonham, fans were clamoring for the mighty band to reunite. This willfully ignored both the vital contribution Bonham gave to the group's mystique and Zeppelin's woeful one-off reunion at the 1985 Live Aid charity concert, but the legend of the band was so strong, reunion rumors reached a fever pitch whenever vocalist Robert Plant or guitarist Jimmy Page had a new album in the stores. In 1994, following Plant's moody, misunderstood 1993 album Fate of Nations and Page's widely lambasted collaboration with Whitesnake singer David Coverdale, the two quietly reunited to record a concert for MTV's then-popular acoustic concert series Unplugged. Page & Plant interpreted the Unplugged moniker rather liberally, bringing in a full orchestra, mandolins, and a hurdy-gurdy among other instruments, and Page turned to an electric guitar on occasion. Nevertheless, the "unplugged" setting did give the duo an opportunity to gracefully back away from the bombast that was assumed to be Zeppelin's stock-in-trade; after all, it would have been very hard to do "Whole Lotta Love," "Dazed and Confused," or "Trampled Underfoot" in this setting. Instead, this gives them a chance to dive into the moodiest material, trading heavily on the folk, blues, and world music that gave Led Zeppelin a richness unheard in their heavy rock peers. This might not be what some diehards were expecting from a reunion, but it was a gutsy move from Page & Plant, and the ensuing album, No Quarter, has aged remarkably well. That's not to say that it's timeless music, or a latter-day comeback on the level of Bob Dylan's Love and Theft, but this is ambitiously atmospheric, restless music by musicians not content to rest on their laurels. They do draw heavily from their past, but these new versions of classic Led Zeppelin songs sound reinvigorated in these new arrangements. At times, this means that the songs are given rather drastic reinterpretations -- "Nobody's Fault but Mine" brings the brooding undercurrent of the original to the surface, "Four Sticks" sounds livelier in this spare setting -- while other tunes sound similar to the recorded versions but are given spirited readings ("That's the Way," "The Battle of Evermore," "Gallows Pole"). Between these revived Zeppelin numbers are a few new songs, all ambitious and solid, fitting right into the vibe of the album; even if they don't match the older tunes, they're respectable and gain strength upon repeated listens. As good as much of No Quarter is, it isn't necessarily the kind of record that invites those repeated listens. At its core, it's an experiment, the sound of two middle-aged musicians looking back at their groundbreaking work and finding both sustenance and inspiration there. That makes for fascinating listening, both upon the first spin and a return play several years later, but it doesn't necessarily make for an album that's played all that often. [Upon its original 1994 release No Quarter contained 13 tracks. Several years later, it was reissued overseas, adding the previously unreleased original "Wah Wah" as a bonus track. Upon the album's tenth anniversary, it was reissued in the U.S. with "Wah Wah," plus the previously unreleased "The Rain Song," which took the place of "Thank You," which was cut from the album on this reissue. Finally, the 2004 reissue retitled the original "Yallah" as "The Truth Explodes."] ~ Stephen Thomas Erlewine, Rovi