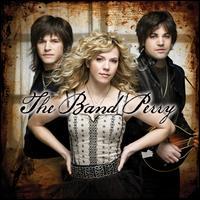 After the success of their first two singles -- "If I Die Young" and "Hip to My Heart," the Band Perry issued a self-titled teaser: a five-track EP that featured a different mix of the latter track. This is confusing, given that it's also the title of their debut album. This is especially true since everything about the group -- Kimberly Perry (lead vocals, guitar, and piano), Reid Perry (bass guitar), and Neil Perry (drums, mandolin, and accordion) -- is so carefully crafted by management, from their look and public image as a family group to their production and presentation (in other words, everything but their considerable talent for writing hooky, rootsy, country-pop songs). Ultimately, it's the latter that matters most. The Perrys wrote or co-wrote the vast majority of what's here. All five tracks from the EP are included on the album (the original mix of "Hip to My Heart" is here, rather than the video mix) along with six others. The meld of acoustic guitars, mandolins, accordion, and piano is added to considerably, with strings, big kick drums, pedal steel, and of course, fiddle. The songs here are carefully crafted; there isn't an extra word, chorus, or beat. The guitar solos are all in the right places, and all the electric instruments take a back seat to the acoustic ones. Standout tracks include the two singles, the angry, damning heartbreak song "Postcards from Paris," and "Independence," with its anthemic chorus and Kimberly Perry's passionate vocal chock-full of determination. The bluesy little rocker "Double Heart" is uncharacteristic of the rest of the set, and may be its best, most unguarded cut. There is no doubt that the Band Perry fits 2010's contemporary country radio and video format. Despite their obvious gifts for writing, singing, and arranging, the album is prone to some overly glossy mistakes. It will be interesting to see how they mature with album number two. ~ Thom Jurek, Rovi