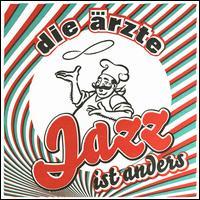 Jazz Ist Anders, Die Ärzte's 11th studio album to date and their first in four years, should thrill devoted fans of the chart-topping German punk band. While it's not as ambitious as their previous album, the double-disc, 25-track Geräusch (2003), it's a tour de force nonetheless. There are 16 songs -- actually, 19 overall if you count the three-track bonus disc -- and each is unique in its own way, whether in terms of songwriting or instrumentation. The three bandmembers (guitarist Farin Urlaub, bassist Rodrigo González, and drummer Bela B.) take turns singing, and all contribute songs of their own, sometimes collaborating with one another. There's plenty of humor and wit, as is expected from Die Ärzte, even at this late stage in their career, and there's also some seriousness. The instrumentation is varied from song to song, incorporating harmony vocals, acoustic guitars, electronics, strings -- a little bit of everything, and thankfully never too much of anything -- while the band generally doesn't stray too far from its punk roots. Sure, some songs like "Nur Einen Kuss" are relatively light, but most are propulsive and sometimes even explosive during their more intense moments (e.g., the chart-topping lead single, "Junge"). More to the point, some songs are clearly better than others. The first half of the album is particularly strong, including a bunch of highlights; for instance, the first six songs ("Himmelblau," "Lied vom Scheitern," "Breit," "Lasse Redn," "Die Ewige Maitresse," "Junge") are all great. The second half of the album does sound a little dull in contrast, but the songs aren't necessarily bad; they're just less impressive than those that kick off the album. Surely, not everyone will be satisfied with Jazz Ist Anders. Ever since the band's 1993 reunion, naysayers have found plenty to harp about. Yet for most devoted fans, Jazz Ist Anders should prove thrilling. No question it was worth the wait. There's a lot of great music here as well as plenty of variety, and the band remains creative without straying too far from its roots. ~ Jason Birchmeier, Rovi