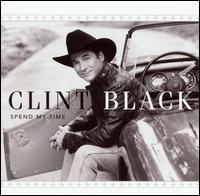 Clint Black was one of the leading figures of the new traditionalist movement of the early '90s, riding it to stardom. By the end of the decade, his celebrity was still rather potent -- helped slightly by his marriage to actress Lisa Hartman -- but his profile had declined, so when his contract with RCA expired after 1999's D'Lectrified, he left his longtime home for a new venture, a new label called Equity, where he was a co-partner with several Nashville industry insiders. It was a good time for Black to move away from the majors: his sales were sliding slightly, and as D'Lectrified illustrated, he wasn't exactly interested in pursuing a purely commercial direction. Some of his early-'90s peers, such as Sammy Kershaw, followed a similar patter, but where Kershaw returned to hardcore country on his first-post major album, 2003's I Want My Money Back, Black uses his freedom to drift away from country, turning in a straight-up singer/songwriter album with Spend My Time, his first record for Equity. This album isn't just laid-back, it's subdued, filled with earnest ballads and lazy rockers, all given a sleek, professional production by Black himself, who wrote all of the material as well (usually with collaborators, particularly Hayden Nicholas). It's a little strange that Black would use his first independent record to make an album so firmly entrenched in the middle of the road -- after all, most artists get rougher, not smoother, when they strike out on their own -- but it's a sturdily constructed album, fitting well within the borders of adult pop, even adult contemporary. And, if there's a problem with the record, it's that -- that it's an adult contemporary singer/songwriter record, lacking the punch and grit of Black's best recordings. Where Merle Haggard provided inspiration on Clint's earlier records, the touchstones here are the Eagles and James Taylor, filtered through modern mature, pop radio. On that level, Spend My Time isn't bad -- Black is still an engaging vocalist, and he's convincing on this rather samey, mid-tempo material -- but it isn't a patch on his best work. It's unsatisfyingly ironic that his first independent venture has resulted in his safest record to date. ~ Stephen Thomas Erlewine, Rovi