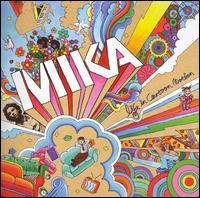 Mika's vivid, aptly named debut album, Life in Cartoon Motion, borrows and builds on the glittery, glamorous, and not-so-secretly sentimental musical territory carved out by Elton John and Freddie Mercury, or more recently, Rufus Wainwright and the Scissor Sisters. Fortunately, his name-dropping, shape-shifting pop is usually good, and genuine, enough to come across as eloquent homage rather than blatant thievery or a tired rehash. Mika's singles are his most charming moments, especially the instant sunshine of "Grace Kelly," which crams tap-dancing rhythms, filmic dialogue, Elton's pianos, Freddie's vocal harmonies, and Brian May's guitars into just over three minutes. "Relax (Take It Easy)" is in the same vein of hypnotic, danceable melancholy as the Scissor Sisters' reworking of "Comfortably Numb," albeit less showy, while "Billy Brown"'s brass arrangement, flowing melody, and soft-shoe rhythms give it the feel of an unusually witty show tune about pre-life crises and living in the closet. As Life in Cartoon Motion unfolds, it reveals more of Mika's musical identity, both for better and worse. His classical piano training gives the album an appealing fluidity, especially on "Any Other World," and lilting, Afro-pop-inspired guitars and harmonies pop up here and there, most effectively on "Big Girl (You Are Beautiful)." However, while Life in Cartoon Motion has lots of enthusiasm and creativity, it doesn't have a lot of nuance. On songs like "Lollipop" and "Love Today," Mika straddles the line between adorable and annoying. And as the overly long, overwrought "Erase" shows, he also doesn't have quite the masterful touch with gentler songs that his influences possess. As admirable as Life in Cartoon Motion's eclecticism is, it could use more focus -- something that songs like the jaunty breakup song "Stuck in the Middle" and angry rocker "Ring Ring" suggest Mika is developing. While more restraint could've taken the album from good to great, its Technicolor, everything-at-once, borderline overdone feel makes it a fitting portrait of Mika as a young artist. ~ Heather Phares, Rovi