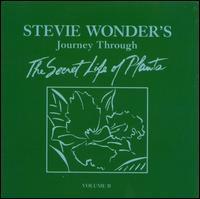 Journey Through the Secret Life of Plants

Stevie Wonder broke a three-year silence, one that followed a series of six classic albums released within six years, with this double album, the score/soundtrack to a little-seen environmental documentary directed by Wild Bunch co-screenwriter Walon Green. From the release of Songs in the Key of Life through the release of Plants, Wonder had been active, actually, but only as a collaborator, working with Ramsey Lewis, the Pointer Sisters, Minnie Riperton, Syreeta, Ronnie Foster, and Michael Jackson. Even so, three years was a considerable lag between albums. Anticipation was so high that this release peaked at number four on the Billboard 200 and R&B album charts. It quickly slipped to footnote status; when Wonder’s 1972-1980 albums were reissued in 2000, it was left out of the program. Plants is a sprawling, fascinating album. Though it is dominated by synthesizer-heavy instrumental pieces with evocative titles, there is a handful of full-blown songs. The gorgeous, mostly acoustic ballad “Send One Your Love” was a Top Ten R&B single, while the joyous “Outside My Window” registered in the Top 60. Beyond that, there’s the deep classic “Come Back as a Flower,” a gently lapping, piano-led ballad featuring Syreeta on vocals. Otherwise, there are playfully oddball tracks like “Venus’ Flytrap and the Bug,” where Wonder chirps “Please don’t eat me!” through robotizing effects, and “A Seed’s a Star,” which incorporates crowd noise, a robotized monologue, and a shrieking Tata Vega over a funkier and faster version of Yellow Magic Orchestra. The album is not for everyone, but it suited its purpose and allowed its maker an amount of creative wiggle room that few major-label artists experience. ~ Andy Kellman, Rovi