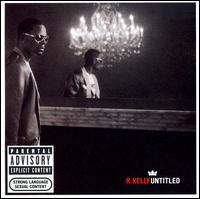 12 Play: 4th Quarter leaked well ahead of its intended release date, and “Hairbraider,” its intended lead single, deservedly flopped, prompting R. Kelly and Jive to shelve the project. Over a year after the leak, and just in time for the 2009 holiday season shopping rush, a new R. album in the form of Untitled receives an official release, featuring a track list drastically different from that of the leaked album. Given that R. had maintained a relatively low profile since his June 2008 acquittal on child pornography charges, Untitled is his least eventful release in nearly a decade. Somewhat surprisingly, he leans on a lot of collaborations. He handles only two tracks by himself, farming out the production and songwriting assistance to an assortment of mostly up-and-coming figures who contribute to no more than a couple songs each. Perhaps R. needed the input from others to help reset his bearings and make a simple, concept-free, creatively unambitious R&B album. There’s nothing outlandish about it, at least not by the R. Kelly standard. In fact, it’s rather understated, heavy on slow jams with only a couple small surprises: the Jack Splash-produced “Be My #2,” heavily reliant on a chunky, adroit disco-funk classic by Rhyze, and “Like I Do,” where Carlos McKinney only slightly adjusts the swishing, gently rocking beat he made for J. Holiday’s “Bed” -- a prime example of R. giving new life to a tired sound with little evident effort. He even humbles himself on the song, if only a little bit: “There’s only two things in this world that I’m the best at, it’s true. Number one is music, and baby girl, can’t nobody work your body out like I do.” He’s coasting here, no doubt about it, but no one can coast like he can. ~ Andy Kellman, Rovi