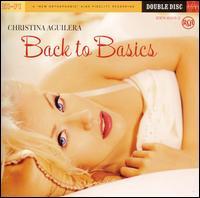 When Christina Aguilera released her garish, sexually charged sophomore effort, Stripped, in 2002, it seemed that she pushed her obsessions with tweaking taboos just a little too far. Sure, she could still sing, but her music was now driven entirely by skeletal club grooves and explicit carnality. It was a bold break from the teenybopper persona she was desperate to shed, but it was overcorrective steering, taking her a little bit too far down the road toward a grotesque caricature, particularly in her ugly video for the album's lead single, "Dirrty." All this grandstanding provoked an intense reaction, not just among fans but among her collaborators, who also wondered if Christina was going a little too far, but she managed to keep from sinking largely on the strength of the ballad "Beautiful," an empowering statement of self-love that managed to dampen "Dirrty"'s impact even if it didn't erase it. It also set the stage for the next phase of her career: as an outright old-fashioned diva, much like Madonna or Cher. Smartly, she followed this path for her third album, the sprawling, deliriously entertaining double-disc Back to Basics.

The title alone on Back to Basics is an allusion that perhaps Christina herself thinks she might have gone a little too far with Stripped; she stops short of offering an apology -- she even has a song where she proclaims she's "Still Dirrty" -- but this album's emphasis on songs and singing, along with the fixation with the big-band era, does suggest that Aguilera is ready to be once again seen as a world-class vocalist. Nevertheless, Back to Basics also makes clear that Stripped, for as flawed as it is, was also a necessary artistic move for Christina: she needed to get that out of her system in order to create her own style, one that is self-consciously stylized, stylish, and sexy. As the endless series of pinup photos in the album's booklet illustrates, Christina is obsessed with earning credibility through association: she dresses up as a big-band vamp and drops allusions to Etta James, Billie Holiday, and Aretha Franklin, all under the assumption that listeners will think of Ms. Aguilera as the heir to that throne. While she may have the vocal chops to pull it off to a certain extent, Back to Basics doesn't quite feel like it belongs to the classic soul and R&B tradition, even if the second disc is designed to be an old-fashioned jazzy R&B album, complete with bluesy torch songs and occasionally live instrumentation. Aguilera's instincts are too modern to make the album sound classic. She remains stubbornly autobiographical -- she disses departed producer Scott Storch on "F.U.S.S.," again addresses the abuse inflicted on her mother by her father, spends much of the album detailing her love for her new husband, Jordan, and always filters everything through a very personal filter that makes this seem like a journal entry à la Alanis Morissette (even "Thank You," subtitled as her dedication to her fans, isn't about the fans; it's about how Christina has inspired them, saved their life, or kept them going while stationed in Iraq -- all stories recounted in the voicemail that runs throughout the track). Her lyrics remain bluntly direct, particularly when she talks about sex: "Candyman" makes her cherry pop and her panties drop, while the "Nasty Naughty Boy" will receive "a little taste of the sugar below my waist." That combined with the slick, precise computerized production means that even when Christina tries to sound classic, she winds up sounding like the present.

But that's what's good about Back to Basics -- even though she strives hard to be a classic soul singer here, she can't help but sound like herself, and surely there is no other big-budget pop album in 2006 that bears the stamp of its auteur so clearly. As she did on Stripped, she has gotten to indulge herself here, but where she was more concerned with sound than structure last time around, on Back to Basics she spends just as much time on song and structure, often coming up with strong, memorable ballads and dance tunes on both the dance-oriented first disc and the slow-burning second. Of course, she reveals more than she intended through her indulgence. Try as she may to sound like a classic singer from the '40s, she really seems to have learned all of her moves from Madonna in Dick Tracy; whether she's shaking her hips to a canned brass section or breathing heavily into a microphone, every move seems to have been copped from Breathless Mahoney -- and that's not just on the campily retro "Candyman" (which sounds like a rewrite of "Hanky Panky"), but it's also true on the deliberately modern numbers like "Ain't No Other Man," whose stabs of sampled brass sound straight out of early-'90s jazz-rap. When Aguilera does stray from the Madonna template here, it's to wander into Fiona Apple territory on the second disc -- with its loping piano, "Mercy on Me" is a dead ringer for anything from When the Pawn Hits the Conflicts He Thinks Like a King. There are hints of a couple other artists here -- some echoes of Norah Jones on the torch songs -- but the fusion of Madonna and Fiona Apple is so inspired and unexpected, it sounds original because nobody else would have thought of it, or put it together in such wildly weird ways as Christina does here. Sure, Back to Basics is way too long at two discs and some of it doesn't work quite as well as the rest, but it has far more hits than misses and it holds together as an artistic statement (certainly more so than any other album made by one of her teen pop peers). It may be all about style, it may be a little crass and self-centered, but it's also catchy, exciting, and unique. It's an album to build a career upon, which would be a remarkable achievement by any measure, but coming after the near career suicide of Stripped, it's all the more impressive. ~ Stephen Thomas Erlewine, Rovi