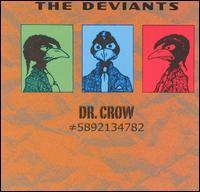 The thing with the Deviants is, either you love everything they do -- in which case Dr. Crow is their most thrilling new release in the six years since their last one -- or you just don't get it. Sadly for the band's dreams of world domination, most people tend to fall into the latter category, but anybody who has pursued mainman Mick Farren across the last 35 years of sonic and literary guerilla-ism will have Dr. Crow cranked up as loud as is humanly tolerable, not caring a toss for what the neighbors think. Because in the Deviants' world, the neighbors don't think -- their brains aren't big enough. Titled for the cover illustration by the late Edward Barker, one of the finest of all Britain's underground artists, Dr. Crow remains the expected growling trawl through the underbelly of modern society, with Farren's vocal still perfecting the kind of slur you normally find creaking out from under dark park benches. "You're Gonna Need Somebody on Your Bond," a slowly sinister remake of the blues of (almost) the same name, lurches like Frankenstein on a very cheap wine binge and takes almost eight fiendishly protracted minutes to get where it's going, while a cover of Adam Faith's 1960 chestbeater "What Do You Want" is transformed from a chirpy, lovelorn request to a surly, why-are-you-disturbing-me snarl which even the delicious presence of the Deviettes -- Johnette Napolitano, Carol Phillips, and the very sensibly named Blair Bitch -- cannot soften.

Elsewhere, Farren's traditional anti-authoritarian bugbears are all on the prowl, lending Dr. Crow a contemporary air that, given the speed with which modern headlines hustle, should date the album faster than yesterday's papers -- but never will. Themes like "The Murdering Officer" and "The Song of the Hired Guns" will always be with listeners, after all. And the Deviants, one trusts, will always be here to point them out. ~ Dave Thompson, Rovi