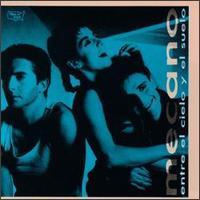 Mecano already were an established band in their origin country, Spain, when they went into the studio to record their fifth studio effort. Nevertheless, up to the release of Entre el Cielo y el Suelo, Mecano's success had seemed somewhat fluky, built on some beautifully crafted pop sensibilities and a very fortunate choice of singles. But then Entre el Cielo y el Suelo came, a powerful collection of potential hits without a single song of landfill to spoil the global result. The record is easily the band's finest to date, combining both Nacho's and Jose Maria Cano's composition skills and, more beautiful than ever, Ana Torroja's flawless voice. The warmth of ballads like "Me Cuesta Tanto Olvidarte" or "Hijo de la Luna" joins together with the melodic perfection of tunes like "Cruz de Navajas," "Ay, Qué Pesado," or even "Las Cosas Pares." Entre el Cielo y el Suelo was Mecano's first work in which Jose Maria, the older of Cano's brothers, manages to demonstrate his authentic value as a composer, leaving behind the aura of the secondary role that had accompanied him until this point. To him belong some timeless, fascinating pop treasures, turned with the step of the years into some of the band's (even Spanish pop's) seminal songs, such as the aforementioned "Cruz de Navajas," "Hijo de la Luna," and "Me Cuesta Tanto Olvidarte" as well as the not less brilliant "No Es Serio Este Cementerio." Meanwhile, his brother Nacho continues showing signs of his compositive geniality in "50 Palabras, 60 Palabras ó 100" or in the poetic "Las Cosas Pares." Ana Torroja reaches kind of enviable vocal registers, which will continue developing throughout subsequent works. The innocent techno-pop of Mecano's beginnings has been transformed here into more mature and timeless singer/songwriter compositions with some well-crafted lyrical and musical passages which made the delights, not only of the band's more unconditional and youthful public, but also of a sector of more adult and traditional tastes. ~ Robert Aniento, Rovi