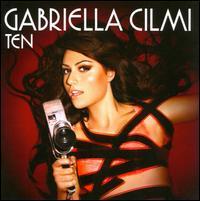 Echoing the authentic '60s retro-soul of Amy Winehouse, Australian teen vocalist Gabriella Cilmi's breakthrough hit, "Sweet About Me," was something of a red herring, as its parent album, Lessons to Be Learned, had much more in common with the self-described "sprock" of Anastacia and the spiky inventive pop of Girls Aloud, unsurprisingly considering that their long-term producers, Xenomania, were at the helm for its entire 12 tracks. But following her appearance at Glastonbury, her support slot on James Blunt's tour down under, and interviews citing Janis Joplin and Led Zeppelin as her main influences, it's a surprise that instead of being preoccupied with establishing her "serious artist" credentials, her second album, Ten, is an even more commercial affair, inspired by both the Studio 54 disco sounds of the '70s and the new wave/synth pop scene of the '80s. Indeed, lead single "On a Mission," a gloriously camp retro-fueled anthem, manages to evoke the spirit of Olivia Newton-John's "Xanadu," Toni Basil's "Mickey," and the Bangles' "Walk Like an Egyptian," all in one Hi-NRG three-minute song. It's a bold statement of intent that indicates from the offset that far from the half-expected tortured singer/songwriter vibe, Ten is only concerned with having fun. Elsewhere, Xenomania's sole contribution, "Hearts Don't Lie," is a funky bass-driven dancefloor filler that could easily have been lifted from the Saturday Night Fever soundtrack, "Invisible Girl" is the kind of slinky robotic synth pop Goldfrapp so cleverly revived, and "Superhot" apes the pulsating production of Donna Summer's iconic "I Feel Love." Best of all is the twinkling synth-led "Love Me Cos," which recalls the gorgeous electronic melancholy of Grace's '90s hit "Not Over Yet." The epic beats of the Dido-esque power "Defender," the gospel-fused "Let Me Know," and the laid-back sultry midtempo "Superman" offer a respite from the party atmosphere, but as competent as they are, Ten is much more interesting when Cilmi unleashes her previously hidden disco diva tendencies. If her aim was to distance herself from the albatross of "Sweet About Me," this unexpected and convincing career re-invention might just do the trick. ~ Jon O'Brien, Rovi