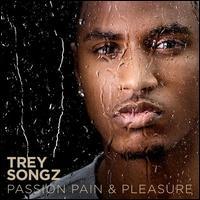 Through the release of his third album, 2009’s Ready, Trey Songz appeared to be an up-and-comer poised for top-tier R&B stardom. A fast succession of three Top Ten R&B singles later, that promise was fulfilled. Rather than squeeze every drop from Ready and take a break or open a clothing boutique, Trey chose to build on his momentum. The week Passion, Pain & Pleasure was released, he was on the R&B chart in six forms, whether as a lead or featured artist, and two of those slots were occupied by his own new singles. The shamelessly mindless “Bottoms Up,” a thematic sequel to “Say Ahh” that features Nicki Minaj, was already in the Top Ten, and the hushed Mario Winans collaboration “Can’t Be Friends,” one of 2010's finest ballads, had touched the Top 30. The remainder of Passion, Pain & Pleasure likewise does not stray very far from Ready. After all, only a year separates their release dates, and they are both dominated by Troy Taylor productions. The early singles highlight Passion’s first half, which also features the classy pleader “Please Return My Call” and playfully libidinous bedroom ballads like “Massage” and “Love Faces.” The album’s back half doesn’t boast an outlandish moment like “I Invented Sex,” either, but it is the strongest, most varied side of a Trey Songz album, just about flawless. It smoothly shifts through several moods. The opulent slow jam “Red Lipstick” rivals anything in a similar mode produced or recorded by the-Dream. Throughout the in-heat “Doorbell,” Trey rides lapping/swaying percussion with impressive agility. The sparse, chilling “Unfortunate” is the most affecting post-808s & Heartbreak song yet, wounded and spiteful without coming across as hateful. “Blind,” a somber narrative, demonstrates how Trey -- who, for all his lyrical boasting, displays considerable vocal aptitude without flaunting it -- is as comfortable in front of a band as he is over a beat. ~ Andy Kellman, Rovi