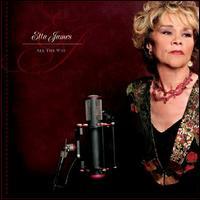 After her tough blues and R&B records in the early years of the 21st century -- 2003's Let's Roll and 2004's Blues to the Bone -- Etta James throws a quiet storm changeup. All the Way's 11 tracks are pop songs -- indeed, a few are standards -- written between the 1930s and the 1990s. James song choices are curious. The Great American Songbook tunes include the title track (written by Samuel Kahn and Jimmy Van Heusen), Leonard Bernstein's and Stephen Sondheim's "Somewhere" from West Side Story, and even Bob Telson's "Calling You" from the score to the 1987 film Baghdad Cafe -- it's been recorded by everyone from Barbra Streisand and Celine Dion to Jeff Buckley and Gal Costa. Unfortunately, nothing gets added in the offering; these are decent if not remarkable renditions. Beginning with track two, James offers her own bead on what a "standard" is with her excellent rendering of Bobby Womack's "Stop on By," (as read through the Boz Scaggs fakebook). James acted as executive producer on this set, which was actually produced by her sons Sametto and Donto Metto James (the rhythm section here), as well as guitarist Joshua Skair. It's overly polished, and that's just the beginning of the problems to be found on the album. The crystalline, laid-back beat, shimmering layered keyboards, and light funky guitar are the hallmarks of a modern adult contemporary soul style that is also employed on a nearly seven-minute cover of Johnny "Guitar" Watson's laid-back soul-blues classic "Strung Out." The really curious moments here are her funk-lite take of Mick Hucknall's (Simply Red) "Holding Back the Years," and a rather boring cover of John Lennon's "Imagine"; they appear back to back here. The other odd sequencing is the way James juxtaposes R. Kelly's "I Believe I Can Fly," James Brown's "It's a Man's Man's Man's World," Prince's "Purple Rain," and Marvin Gaye's "What's Goin On." (co-written with Al Cleveland and Renaldo Benson). This quartet of tunes makes profound sense, though, as they are all tracks by some of the great African-American song composers in history. The problem lies in the interpretation. Kelly's true, positive-thinking anthem becomes a sensitive ballad in James' treatment of it, removing its life and making it a syrupy sun poem. Likewise, "What's Goin' On" is nearly too polished, and feels more like a meditation on the past than a song interpreted to reflect the urgency of the day -- which it most certainly does. The lavish flamenco intro to the Brown tune is a bit off-putting in terms of its slickness, but the smoky, militantly female reading redeems it and makes it one of the album's best tunes. Which leaves the Prince cover: with its compressed acoustic guitar and Sklair's electric fills, dovetailed by a Rhodes piano, James reinterprets this as a mature soul workout. She adds depth, dimension, and underscores how timeless a tune it is by adding more tough-love R&B to its gospel flair. It should have been chosen to close the disc. Despite her best intentions and the authority of her voice, All the Way is far from perfect. Compared to her last two outings, it simply pales. The ambition of the concept does not yield the hoped-for results in the packaging. ~ Thom Jurek, Rovi