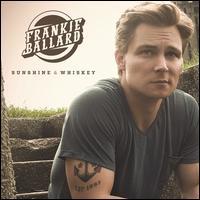 Michigan-born Frankie Ballard nonetheless has a voice straight out of Nashville, he possesses good to sometimes very good songwriting skills, and he's a pretty hot guitar player as well. Couple all of this with the fact that Ballard knows exactly the audience he's aiming for, which means hits on the radio, and you have the backdrop for his second album, Sunshine & Whiskey. Everything here would slot into a set on contemporary country radio as easily as a beer goes down on a country back road. There are plenty of those back-road beers, wild Friday nights, and romantic hits and misses -- all of which are becoming ubiquitous motifs on the contemporary country charts -- in Ballard's songs. It's when Ballard rises above the generic that he really shows what he's capable of, and gems like "Sunshine & Whiskey," a beautiful, joyous bounce-along alcoholic's love song if ever there was one, "It Don't Take Much," a wonderful piece of power pop country, and "Helluva Life," which, while it's riddled with country clichés, does it intelligently, find him sounding something like Tom Petty if Tom Petty was actually George Strait and grew up in Michigan. On the flip side, though, are formula-ridden songs like "I'm Thinking Country," which is too obvious an anthem wannabe to be anything but clichéd, and the harrowing and melodramatic "Don't Tell Mama I Was Drinking," which is just too heavy-handed to really be taken seriously. Still, most contemporary country fans should love this album, and there are tracks here where Ballard hits everything right, rising above the commercially generic with energy and intelligence. ~ Steve Leggett, Rovi