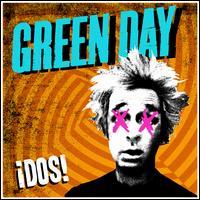 Two days after the release of ¡Uno!, the first installment of an ambitious punk-pop trilogy from Green Day, Billie Joe Armstrong checked into rehab for various substance problems, problems that reached a head during an on-stage meltdown at a radio festival the weekend prior to the album's release. Needless to say, the band's complicated plans for 2012 and 2013 were adjusted, with the supporting tour scrapped and the concluding LP ¡Tré! moved up from January to December. Amidst the chaos, the one thing unaffected was ¡Dos!, which appeared according to schedule in November of 2012. While certainly cut from the same cloth as ¡Uno!, ¡Dos! has a different feel than its cousin. Green Day pushed all of their Who-inflected arena rock onto the first of the albums, leaving ¡Dos! a high-octane collection of garage pop and hooky punk. At the outset, Billie Joe declares it's "F*** Time," and he's not entirely kidding, either. This is the "Makeout Party" album, a breakneck sprint through songs about girls ("Ashley," "Amy"), wild ones, and "Nightlife," the latter awkwardly incorporating a rap from Lady Cobra. Armstrong spits out profanities as he thrashes on his guitar, pounding out hooks that dig in immediately, possibly because they recall anything from '60s frat-rock to '70s punk. In that sense, ¡Dos! recalls Green Day's terrific 2008 busman's holiday Foxboro Hot Tubs (indeed, "F*** Time" began as a FHT song), but this feels more hedonistic, even if the production is crisper and clearer than Stop Drop and Roll!!!! Maybe it's all due to the knowledge of Armstrong's post-recording breakdown, but he feels positively desperate to have a good time at all costs, grasping for a quickly fading past. Clearly, all the partying caught up to him, but while he was racing recklessly, he cut this terrific little party record. ~ Stephen Thomas Erlewine, Rovi