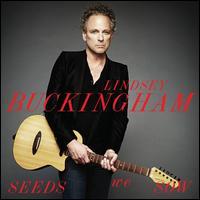 Since resuming his solo recording career with 2006's Under the Skin, songwriter and guitarist Lindsey Buckingham has worked steadily but quietly. After the gorgeous Gift of Screws in 2008, he toured briefly and returned to the shadows; but the three years between it and 2011's Seeds We Sow was fraught with change. Buckingham left the major Warner umbrella and created his own label, Mind Kit Records. He recorded, performed, and produced Seeds We Sow at home. The sound of this album is very different from anything we've heard from him before, even if his musical and lyrical signatures are all over it; they pick up where Gift of Screws left off. That said, sonically it couldn't be more different than anything he's done before: it sounds like a self-made recording, which is a very good thing. Buckingham's classy songwriting and guitar playing are trademarks, but so is his ambition as a record producer. Seeds We Sow is delightfully ragged. "When She Comes Down" has a bassline that's actually distorted in the final mix, as if it were a polished demo. That said, its gorgeous melody and lyrics, carried by layers of voices and guitars, create a blissed-out love song. "In Our Own Time" is a labyrinthine rock tune whose guitars simulate strings, as organic and synthetic percussion create twin pulses that contrast beautifully with his melodies (there are two of them) and which criss-cross and breed. "That's the Way Love Goes" is the only track here with other musicians: drummer Walfredo Reyes, keyboardist Brett Tuggle, and bassist Neale Heywood. It passes for a big, explosive rocker on this set, full of Buckingham's knotty Baroque pop touches, but it's a very basic production. "Stars Are Crazy" is about the results poisonous romantic relationships reap. Buckingham's lyric understands that they are all too human; long after they end, they pick at our emotional scabs. His multi-layered acoustic guitars and harmonies act as other voices, empathically reflecting back to us the haunting regret and desire for redemption in the middle of the night. "One Take" is a punchy, snarling, confessional rocker. "End of Time" is a classic Buckingham tune. It may be about karma, but it feels like a guttersnipe Fleetwood Mac delivering a pop song. He delivers -- and makes his own -- a solo acoustic cover the Rolling Stones' "She Smiled Sweetly," to mark the end of a remarkable, homegrown project that challenges listeners to expand their definitions of Buckingham and include him as an indie singer/songwriter. ~ Thom Jurek, Rovi