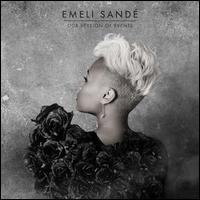 Our Version of Events

In 2012, Brit's Critic Choice Award, a best new artist prize for the United Kingdom's best talent, unsurprisingly went to Emeli Sandé, a woman being lauded for her crystalline voice and her immaculate songwriting skills. By the time her debut album, Our Version of Events, hit shelves, Sandé had already been a number one-selling singer and songwriter, and had her work covered by names such as Tinchy Stryder, Alesha Dixon, and Susan Boyle. Many call the 24-year old starlet a jack-of-all-trades, and after listening to her first full-length debut, it's easy to understand why. Events skip from genre to genre breezily, often being carried by Sandé's piercing voice. Sonically, the album sounds like a whisked-blend of Leona Lewis, Kate Bush, and Alicia Keys -- but, somehow, Sandé still establishes her own style between the airy coos, sultry piano melodies, and sprinkling of xylophones, synths, and bells. Sandé's strongest tracks are such a mixed-bag -- the Professor Green-spinoff "Read All About It (Part III)" is a raw interpretation of the massive pop single, "Lifetime" is a midtempo love song that's as engaging as a close listen as it is late at night, and the electrifying first single "Heaven" has all the makings of a vibrant dance record slicked up for the floor. A true feature of this album is the sheer quality of the compositions, which, for lack of a better term, are unexpectedly sophisticated and nuanced for a mainstream record. What holds the album back in parts is the fact that its tempo is too slow at times, however, Sandé makes up for it with passion and precision. Our Version of Events is an earnest collection of works by a woman who is as good a composer as she is vocalist, a lethal combination in today's pop music business. In this case, the Critic's Choice Award was well deserved. ~ Matthew Chisling, Rovi