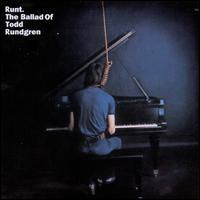 Runt: The Ballad of Todd Rundgren

Upon its release, Rolling Stone called The Ballad of Todd Rundgren "the best album Paul McCartney" never made, and even if the album doesn't sound particularly McCartney-esque, it does share the homespun, melodic charm of the best of his early albums. Arguably, it's better than Paul's solo work, since it is focused and subtle, never drawing attention to Rundgren's considerable skills as a writer and producer. He tones down the hard rock and his impish wit, lending the album a sense of direction missing on Runt. That's not to say he abandoned his sense of humor -- as if the cover shot of Rundgren sitting at a piano with a noose around his neck left any doubt. This time around, it takes some careful listening to hear the jokes, such as the opening Floyd Cramer piano lick on "Range War." On such clever in-jokes as "Chain Letter," as well as ballads like "Hope I'm Around," the artist reveals himself as an exceptional craftsman and songsmith. In fact, Ballad is considerably more song-oriented than its predecessor, with very little of the jams and instrumental sections that occasionally bogged down Runt. Here, even propulsive pop tunes such as "Bleeding" and "Long Flowing Robe," along with the hard rocker "Parole," are as much about the song as the performance, which is probably appropriate for an album called The Ballad of Todd Rundgren. Another thing about that title -- it may be a joke, but the album inarguably offers a glimpse into Rundgren's inner world through a combination of introspective ballads, off-hand jokes, musical virtuosity, outright weirdness, and unabashed showmanship. And that's the charm of The Ballad -- it's the slyly sardonic masterwork of a loner who may be sensitive, but is certainly not shy. ~ Stephen Thomas Erlewine, Rovi