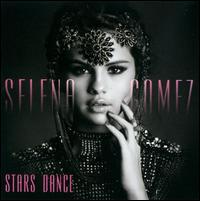 Selena Gomez has carved out a pretty nice career as a pop singer over the course of a run of well-produced, well-written, and very well-sung albums that haven't always been full of smash hits, but have an overall level of quality that pushed her to the head of the Disney class. After an album, 2011's When the Sun Goes Down, that streamlined her sound into a sleek and shiny pop rocket with both eyes on the dancefloor, Stars Dance takes a (slightly) more eclectic approach. Gomez and her team of writers and producers don't stray far from the dancefloor and party jams, and these are the strongest songs on the album. It's hard to resist the jumping beats, shiny synths, and Gomez's cheery vocals on tracks like "Slow Down," "Undercover," and the disco-y "Save the Day." Even when she's lamenting her mostly broken heart, as on the thumping "Forget Forever" or the loping "Write Your Name," it's hard to keep from wanting to hit the dancefloor. The only sad song that makes you want to stop and cry a little is the seriously bummed "Love Will Remember." Like her previous albums, though, there are a few surprises this time out. Not that a song being influenced by dubstep in 2013 is really shocking, since even tissue commercials have a dubstep sound, but her take on it, the moody title track, at least does a decent job of integrating the rippling bass and thudding tempo into Gomez's world. The bubblegum twerk jam "B.E.A.T." is lots of fun, the tablas add a nice mystical touch to "Come & Get It," and somehow she doesn't sound completely ridiculous imitating Buju Banton on the dancehall jam "Like a Champion," which samples his song "Champion" -- instead, she just sounds spunky. Thanks to the strong songs, Selena's reliably strong vocals, and the variety of sounds, it adds up to be another fine entry in her catalog and just another example of why Selena Gomez is one of the best pop stars making music in 2013. ~ Tim Sendra, Rovi