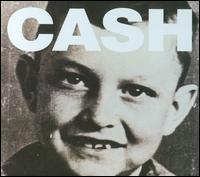 Released for the occasion of Johnny Cash's 78th birthday, American VI: Ain't No Grave is the final installment in the collaboration between Cash and Rick Rubin that began with 1994’s American Recordings. These ten songs were cut during the same sessions for American V: A Hundred Highways. Guitarists Mike Campbell, Matt Sweeney, Smokey Hormel, and Benmont Tench on keyboards were present, as were other musicians. June Carter Cash died during routine surgery during these sessions. Cash, though grief stricken and with full knowledge that he too was dying due to complications from Parkinson’s disease, worked as often as his health would allow. He died three months after these songs were recorded. Ain't No Grave is an elegiac and deeply spiritual album, a formal goodbye without regret from a man and an artist of almost mythic stature. The song selection is rooted in the Americana, folk, country, and gospel traditions. There is an excellent reading of Tom Paxton's “Wonder Where I’m Bound” that doesn’t feel as lost as the original, but more a statement after reflecting on a life fully lived. Likewise his version of Sheryl Crow's “Redemption Day” sums up Cash’s own long commitment to social justice, and the need for individual accountability; its statement of hope is underscored here not as a dream, but as a conviction. Kris Kristofferson's “For the Good Times” begins with the words: “Don’t look so sad, I know it’s over/But life goes on/And this ole world will keep on turning.” It offers a portrait of the dignity and grace Cash performed with all his life. “I Corinthian’s 15:55” is his last self-penned song, a sweet, country-gospel melody that echoes far beyond the margins of contemporary music to an earlier time, and looks at the future with unshakable faith. The title track is a country-gospel-blues by Brother Claude Ely -- it’s a fierce showdown with the Reaper, with the singer winning it hands down. There are excellent covers of Bob Nolan's “Cool Water,” a song Cash often sang live that expresses empathy for the downtrodden, and “Satisfied Mind,” written by Jack Rhodes and Red Hayes, played on a lone acoustic guitar, which dispenses the truth of earthly life into two-minutes-and-forty-eight seconds. Ed McCurdy's “Last Night I Had the Strangest Dream” is a true anti-war song that serves as a testimonial. The album’s final cut is Queen Liliuokalani's traditional Hawaiian ballad “Aloha Oe,” one of the sweetest, most affectionate leaving songs ever written. And Cash’s version? It’s devastatingly beautiful; to the point of tears. If there were any justice, Ain't No Grave would be the last album released under Cash’s name. It is not only a compelling contribution to his legacy, but an offering that closes the historic American Recordings series with the same stamp of quality that began it. ~ Thom Jurek, Rovi