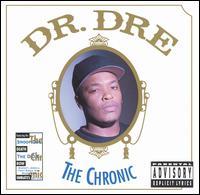 With its stylish, sonically detailed production, Dr. Dre's 1992 solo debut, The Chronic, transformed the entire sound of West Coast rap. Here Dre established his patented G-funk sound: fat, blunted Parliament-Funkadelic beats, soulful backing vocals, and live instruments in the rolling basslines and whiny synths. What's impressive is that Dre crafts tighter singles than his inspiration, George Clinton -- he's just as effortlessly funky, and he has a better feel for a hook, a knack that improbably landed gangsta rap on the pop charts. But none of The Chronic's legions of imitators were as rich in personality, and that's due in large part to Dre's monumental discovery, Snoop Doggy Dogg. Snoop livens up every track he touches, sometimes just by joining in the chorus -- and if The Chronic has a flaw, it's that his relative absence from the second half slows the momentum. There was nothing in rap quite like Snoop's singsong, lazy drawl (as it's invariably described), and since Dre's true forte is the producer's chair, Snoop is the signature voice. He sounds utterly unaffected by anything, no matter how extreme, which sets the tone for the album's misogyny, homophobia, and violence. The Rodney King riots are unequivocally celebrated, but the war wasn't just on the streets; Dre enlists his numerous guests in feuds with rivals and ex-bandmates. Yet The Chronic is first and foremost a party album, rooted not only in '70s funk and soul, but also that era's blue party comedy, particularly Dolemite. Its comic song intros and skits became prerequisites for rap albums seeking to duplicate its cinematic flow; plus, Snoop and Dre's terrific chemistry ensures that even their foulest insults are cleverly turned. That framework makes The Chronic both unreal and all too real, a cartoon and a snapshot. No matter how controversial, it remains one of the greatest and most influential hip-hop albums of all time. ~ Steve Huey, Rovi