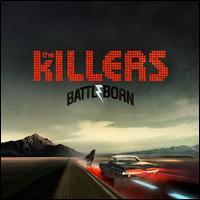 The great open secret about the Killers is that they only make sense when they operate on a grand scale. Everything they do is outsized; their anthems are created for fathomless stadiums, a character quirk they've grown into over the years as they've gone from scrappy wannabes fighting their way out of Las Vegas to the international superstars they've longed to be. Nearly ten years after Hot Fuss -- a decade that flashed by like a falling rocket -- the Killers aren't quite the new U2 or the Cure, to name two of their inescapable role models, but they're not Echo & the Bunnymen, either, doomed to be playing for an ever-selective audience. They are new millennium superstars, filling stadiums and flying under the radar, maintaining a popularity that justifies -- even demands -- albums as overblown as Battle Born, their fourth full-length and first to bear the stamp of the utter ease of a veteran. Unlike their three previous albums, the Killers don't necessarily have anything to prove on Battle Born: they've carved out their kingdom and now they're happy to reside within it, taking their time to ensure their palaces are overwhelmingly opulent. And Battle Born is indeed a dazzling spectacle, an inversion of the blueprint handed down from 2008's Day & Age, where the band emphasizes songs over sound. Battle Born is constructed on a smaller scale -- there are no interludes, most songs are trimmed of fat, with "From Here On Out" breezing by at under 2:30 -- but the group has internalized the sprawl of Sam's Town so they retain the wide-open spirit of the desert, not to mention the band's persistent obsession with Bruce Springsteen's mini-operas of love won, lost, and gambled. In fact, the Killers are slowly stepping away from any dance-rock trappings they once displayed, all while refusing to abandon synthesizers, which leaves Battle Born as this curious fusion of the aesthetics of 1983 applied to the roots rock of 1989; not quite so futuristic as willfully out of time. All this is reconfirmation of how the Killers exist in their own world, one that's tethered to an alternate classic rock history where Born to Run is ground zero, MTV the British Invasion, and Joshua Tree Sgt Pepper's. Of course, all of this music is now far, far in the past, so it's no surprise the Killers no longer sound like kids. They're veterans at this game, a group who has been trading in these stylized, glamorized fusions for a decade, and that slightly weathered attitude is now part of the band's appeal; they're veterans that know how to use their tools, so even if the raw materials may not be quite as compelling as their earliest singles, the overall craft on Battle Born is more appealing. And if age has changed the Killers attack, it has done not a thing for Brandon Flowers as a lyricist, who remains committed to gobsmacking poetry and allusions, and cracked observations that somehow sound endearing when encased in the well-lubricated machinery of Battle Born. [An LP version was also released.] ~ Stephen Thomas Erlewine, Rovi