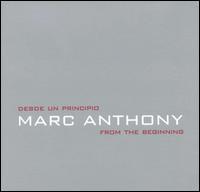 Desde Un Principio is a superb collection of Marc Anthony's biggest salsa hits, which preceded the English language success he attained with his 1999 self-titled album. The only complaint is that several of the songs are severely truncated, especially toward the end, but, nonetheless, this proves to be an ideal introduction to the singer, especially for fans who became aware of him only after "I Need to Know"." This album, arranged more or less chronologically, assembles four songs from his debut, Otra Nota, including his gutsy take on Juan Gabriel's "Hasta Que Te Conoci," four songs from his fantastic sophomore album, Todo A Su Tiempo, and four from Contra La Corriente. The album also includes "No Me Ames," his hit duet with Jennifer Lopez from her album On the 6 (which, to Lopez's credit, is surprisingly good), and "Vivir Lo Nuestro," his sizzling duet with India from her album Dicen Que Soy. Finally, the album also includes his version of "Preciosa," which is a tribute to Puerto Rico, and his rendition makes one believe it was written specifically for him. Marc Anthony's delivery is always passionate, sophisticated, and elegant, and, despite a serious lack of liner notes, Desde Un Prinicpio proves a wonderful introduction to the music of Marc Anthony, a singer that, undoubtedly, will one day rank among the best. ~ Jose F. Promis, Rovi