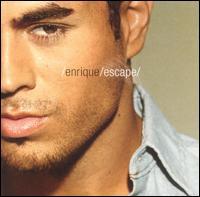 If money is the great influence, then call Enrique Iglesias the most influential Latin music artist in the world, having sold a record-breaking number of albums over a stretch of several years. With Escape, his sophomore English-language release, he brings the whole Latin Invasion to a screeching halt, or "maybe" a gentle halt, making for an opportune screeching question: Have Latins traded in their musical roots for the American musical dream? When Latin-flavored music came flooding into the United States in the late '90s, it sounded a lot more, well, "Latin" than it sounds these days. Repetition and popularity certainly have something to do with it, and keep in mind that the likes of Ricky Martin, Christina Aguilera, and Jennifer Lopez have had the benefit of hits from American pop writer heavyweights like Diane Warren, Carl Sturken, and Evan Rogers. Here, however, is an album executive produced by and with every song written (with collaborators) by Iglesias. The musical result is not exactly consecrated to his native country of Spain, nor his Miami upbringing. Touring with musicians from the bands of Billy Joel, Elton John, and Bruce Springsteen might have shaken loose the rock soul inside of him. Escape is a pop/rock album through and through, and it is also reminiscent of classic pop albums of the 1980s -- short (ten original songs), sweet, and wildly catchy. It is not without Spanish flavor, if only for Iglesias' pronunciations and three added Spanish-version tracks; it just has other priorities in mind. Though Iglesias' songs always turn up as remixes and at dance clubs, and though he could just as easily thicken the sound effects to overtake the basic melodies, he remains reserved in sound and lyric. On "One Night Stand," he makes reference to intimate belongings left behind by his "girlfriend." There is such a childlike vulnerability in his voice that listeners get the impression this scenario may not have ever happened to him.

While Escape is not excessively stylized, it is meticulously styled in the way great albums are, where surprises are hidden in every corner. The surprises here include hushed female vocals that glide into the choruses (most notably on "Don't Turn Off the Lights") and the rippling echoes and vocal distortions that begin on the title track and run like a theme throughout the rest of the album. There are also the natural gifts that he brings, his singing for one, which is both trembling and direct -- he creates anticipation for the moments when he will break the latter syllables of a word into a lilting high note or an unyielding holler. No one will ever blame Iglesias for lack of emotion and, if his music inspires heart tugging, his voice -- always in control even when it sounds on the verge of tears -- is the culprit. He may milk it excessively on a drippy ballad like "Love to See You Cry," but it is perfect for the beautiful "Hero." Elsewhere, driven by guitar strumming and drum rattling, "Maybe" carries the essence of the whole album. The simplicity of the lyrics "Maybe you'll say that you want me, maybe you'll say that you won't" will not earn high points with art appraisers, but the day pop music demands intellect over emotion is the day love songs serve no purpose. Some people have questioned how "Hero," a song about longing for romantic love, was accepted as an anthem for the World Trade Center tragedy. Despite lyrics like "Would you tremble if I touch your lips," it makes sense. At the time of its release, in the wake of war and broken hearts, Iglesias' new album, and indeed the song "Hero," are a reminder that love, no matter how seemingly out of reach, is the conquering force. Maybe the Latin Invasion has ended. Maybe Latin musical roots are now growing in American listeners in the same way American rock has been ingrained into other cultures for years. And maybe that is why Escape is not just an English-language album by a Spanish artist, it is a universal album about love. Love is a greater influence than money and, as Iglesias sings, "In the end, our love mattered." ~ Peter Fawthrop, Rovi