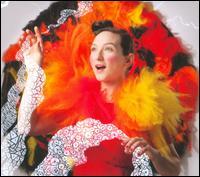 All Things Will Unwind

Beginning with 2006’s hauntingly beautiful Bring Me the Workhorse and continuing with the ambitiously orchestrated A Thousand Shark’s Teeth two years later, My Brightest Diamond’s Shara Worden offers her most complex and fully realized work yet with All Things Will Unwind. In collaborating with the acclaimed yMusic chamber ensemble, a surprisingly natural partnership is born, as the group lends textured orchestral flourishes -- whimsical woodwind trills, majestic horns, gamelan-esque percussion -- that punctuate and elevate Worden’s soaring, operatically trained vocals. The record feels cinematic; each track has a singular sense of drama, conjuring the poignancy of Antony and the Johnsons, passion of Edith Piaf, and eclecticism of Regina Spektor, flowing together into a lush, stirring study in art pop. Since recording A Thousand Shark’s Teeth, Worden has returned to her native Southeast Michigan, and the influence of Detroit as a microcosm of cross-country Obama-era issues comes to bear here. As she sings "We added up to zero/...What a pair of agreeable disagreeables" in the cabaret-like "We Added It Up," partisan political struggles come to mind, while the almost twee "There’s a Rat" employs animal characters to address the economic crisis and "High Low Middle" takes the form of an old-time protest song about unemployment. In the wrong hands, this could come across as preaching from the soapbox, but Worden’s unique vision lends courage, vulnerability, and heart instead. And just as the political was an influence here, so too was the personal: as Worden had her first child in summer 2010, she delivers a message in utero with "Reaching Through to the Other Side," and on the ethereal "I Have Never Loved Someone the Way I Love You" ponders the eternal nature of the heart, promising "When I grow to be a poppy in the graveyard/I will send you all my love upon the breeze." All Things Will Unwind finds this musical auteur at the top of her game, maturing, pushing her already broad boundaries, and brimming with imagination. ~ Chrysta Cherrie, Rovi