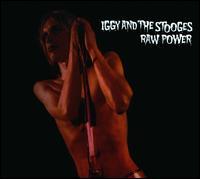 In 1972, the Stooges were near the point of collapse when David Bowie's management team, MainMan, took a chance on the band at Bowie's behest. By this point, guitarist Ron Asheton and bassist Dave Alexander had been edged out of the picture, and James Williamson had signed on as Iggy's new guitar mangler; Asheton rejoined the band shortly before recording commenced on Raw Power, but was forced to play second fiddle to Williamson as bassist. By most accounts, tensions were high during the recording of Raw Power, and the album sounds like the work of a band on its last legs -- though rather than grinding to a halt, Iggy & the Stooges appeared ready to explode like an ammunition dump. From a technical standpoint, Williamson was a more gifted guitar player than Asheton (not that that was ever the point), but his sheets of metallic fuzz were still more basic (and punishing) than what anyone was used to in 1973, while Ron Asheton played his bass like a weapon of revenge, and his brother Scott Asheton remained a powerhouse behind the drums. But the most remarkable change came from the singer; Raw Power revealed Iggy as a howling, smirking, lunatic genius. Whether quietly brooding ("Gimme Danger") or inviting the apocalypse ("Search and Destroy"), Iggy had never sounded quite so focused as he did here, and his lyrics displayed an intensity that was more than a bit disquieting. In many ways, almost all Raw Power has in common with the two Stooges albums that preceded it is its primal sound, but while the Stooges once sounded like the wildest (and weirdest) gang in town, Raw Power found them heavily armed and ready to destroy the world -- that is, if they didn't destroy themselves first. [After its release, Iggy was known to complain that David Bowie's mix neutered the ferocity of the original recordings. In time it became conventional wisdom that Bowie's mix spoiled a potential masterpiece, so much so that in 1997, when Columbia made plans to issue a new edition of Raw Power, they brought in Pop to remix the original tapes and (at least in theory) give us the "real" version we'd been denied all these years. Then the world heard Pop's painfully harsh and distorted version of Raw Power, and suddenly Bowie's tamer but more dynamic mix didn't sound so bad, after all. In 2010, the saga came full-circle when Columbia released a two-disc "Legacy Edition" of the album that featured Bowie's original mix in remastered form] ~ Mark Deming, Rovi