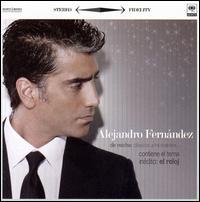 Relative to his previous album, the Latin pop blockbuster Viento a Favor (2007), the old-fashioned boleros performed on De Noche: Clásicos a Mi Manera are a modest effort by Alejandro Fernández. The Mexican superstar tends to alternate his contemporary pop albums with less ambitious releases, generally in-concert recordings or collections of traditional material, so a modest effort such as De Noche shouldn't surprise his legion of devoted fans who are no doubt accustomed to his steady if varied output. Directed musically by Pedro Ramírez, the longtime producer of both Alejandro and his father, Vicente Fernández, De Noche is a refreshing change of pace for El Potrillo, whose contemporary pop efforts are at times overwrought. In contrast, De Noche is breezy. It's so breezy, in fact, its 16 tracks seem to fly by, wrapping up all too soon with a playful version of Puerto Rican composer Rafael Hernández's "Perfume de Gardenias." The arrangements of Ramírez are on grand showcase throughout the hourlong De Noche, gracing the album with a consistent style and mood that feels timeless. The vocals of Fernández are also showcased impressively throughout, as he instills this collection of old-fashioned boleros with a modern touch and youthful vigor. The songs are indeed vintage, predating not only Alejandro but sometimes even his 68-year-old father. The most notable songwriters represented on De Noche are Armando Manzanero, one of the leading Mexican composers of the postwar era; Roberto Cantoral, a composer of numerous Latin standards as well as a member of Los Tres Caballeros; and Agustín Lara, arguably the leading Mexican composer of the prewar era. Each of these three composers is represented by a pair of songs, all of them album highlights: Manzanero's "No" and "Contigo Aprendí," Cantoral's "El Reloj" and "Regálame Esta Noche," and Lara's "Piensa en Mí" and "Noche de Ronda." Other standouts include Julio Iglesias' "Abrázame" and Carlos Gardel's "Un Día Que Me Quieras." With such classic material, plus the musical direction of Ramírez and an impassioned performance by Fernández, there's a lot to like about De Noche. In particular, it's nice to think that legendary Mexican composers such as Manzanero, Cantoral, and Lara (not to mention more obscure composers featured here such as Luis Demetrio, Cuates Castilla, and Graciela Olmos) might be rediscovered by the younger generation of music listeners drawn to Fernández as opposed to more elderly singers such as his father or Javier Solís, who draw a more gray-haired demographic. If there's a problem with De Noche, however, it's that about a third of these songs were performed previously on past albums by Fernández: "Abrázame" on Muy Dentro de Mi Corazón (1997), "No" on En Vivo: Juntos por Ultima Vez (2003), "Nadie Simplemente Nadie" on Mi Verdad (1999), "Contigo Aprendí" on Piel de Nina (1993), and "A Pesar de Todo" on Grandes Exitos a la Manera de Alejandro Fernandez (1994). Great songs all of them, yet couldn't Fernández have picked some others he hadn't already recorded? ~ Jason Birchmeier, Rovi