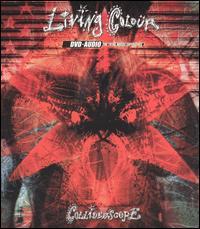 Living Colour's appetite was always voracious. It attacked rock, funk, and jazz textures with a tenacious, blind energy, and opened wide to accommodate lyrically outsized social and political issues. But while the band had an incredible capacity for honing its humongous sound and vision into searing (or grooving) anthems, its lyrical kvetching sometimes seemed self-righteous, and the constant, radical aesthetic shifts could be jarring. And yet, Living Colour's stagnation after 1993's Stain was strange. They had always been so hungry, so exploratory -- three albums didn't seem like sufficient nourishment. As it turns out, the quartet wasn't finished. A round of 2000s reunion gigs has led to CollideØscope, a barbed and literate work that tears anew into Living Colour's signature sound, but is also flawed by a few of those old shortcomings. Vivid and Time's Up's flashes of cynical humor ("Glamour Boys," "Elvis Is Dead") were largely gone by Stain, replaced with a claustrophobic weariness typified even in song titles -- "Go Away," "Mind Your Own Business." CollideØscope further emphasizes that shift. Here, Corey Glover's lyrics grapple with media, herd mentality, and the loss of faith. But it's the specter of 9/11 that really casts a pall, since he sees much of the mind control and climate of complacency in the U.S. as ramifications of that tragedy. Vernon Reid accompanies this sociopolitical soul-searching with guitar work that's serrated, dirty, and consistently amazing. "Song Without Sin" and especially "A ? of When" nod again to Bad Brains; the latter's staccato lyrical fatalism unfolds hardcore style over Reid's assaulting riff. As they do throughout, Will Calhoun and Doug Wimbish prove to be a formidable rhythm section, expertly exerting varying levels of pressure on the mid-level mess of guitar and sound bed cacophony. In a classic Living Colour move, one of the album's most alluring songs is also its most disturbing. Detailing the World Trade Center's destruction from one wrenching point of view, Glover's voice follows "Flying"'s light, soaring funk with a detachment that's arresting. "I jumped out the window to get to the parking lot," Glover sings. "Never in my life have I felt a heat so hot/I had to get out." When things get this heavy, a little levity would be nice -- not to ignore what happened (or what is happening), but to alleviate the immediacy of CollideØscope's single-mindedness. This dour heart is at once the album's greatest strength and biggest weakness. Living Colour proves it hasn't lost a step by rocking out of the box with such visceral anger and scenery-chewing musical adventurism (check out the drum'n'bass/dub hybrid "In Your Name" or instrumental coda "Nova"; a mid-album run through AC/DC's "Back in Black" also rocks energetically and without agenda). There's no doubt CollideØscope is a welcome return for a group that never should have left. But the quartet's blistered, gray-sky worldview makes listeners forget the flutter of "Solace of You" or the sighing soul update "Broken Hearts," and the permeating darkness obscures the mixture of hope and anger that makes its music so thrilling. ~ Johnny Loftus, Rovi