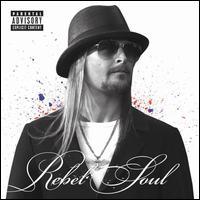 Kid Rock went the respectable rock route on 2010's Born Free and it didn't pay back any dividends. He failed to garner any newfound love from buttoned-down critics and, more importantly, he didn't sell many copies of the new album, so when it came time to record a follow-up he returned to his tried and true, embracing his impeccable sense of sleaze. And so Rebel Soul is as tawdry as Born Free was clean, a celebration of every tacky obsession Kid Rock has, from strippers to downriver brawling with Detroit white trash. Rock produced this record by himself and Rebel Soul has an appealingly cheap sound, as the singer never seems so bothered with finessing the performances into something sonically appealing. Rock has enough discipline to realize when his records would sound lazy -- he flirts with the predictable, churning hard rockers, the kind that would have cluttered FM album rock stations back in his teenage years 20 years ago -- giving them just enough spark so they don't sound tired. And that, in a nutshell, is Rock's gift: he's a traditionalist aware of the shifting times, adjusting just enough to not alienate his fans while maybe capturing a couple new ones. Rebel Soul is a consolidation, not an expansion, and it's pretty good on those terms. Rock knows his white trash obsessions could be adapted to any number of styles but he chooses the easiest route for Rebel Soul, hitting the common denominator hard and wallowing in the filth of "Cucci Galore" which, in his good sense, Rick Rubin refused to let Kid Rock record for Born Free. Rock knows that his appeal rests on bad taste and he wallows in it here, cherishing familiar three-chord rockers and finding ways to twist and invert songs you've heard before. He's not always successful -- "God Save Rock n Roll" is a procession of clichés that makes him sound about 20 years older than he is -- but there's an enthusiasm to Rock's embrace of clichés that makes Rebel Soul kind of hard to resist. He's planting his flag on that old-time rock & roll -- "Mr. Rock n Roll" name-checks hits that are nearly 60 years old -- but it's not an act; Kid Rock believes in this stuff and he's doing his damnedest to bring it into the 21st century. As he does so, he sounds a bit anachronistic -- he's pledging allegiance to an era that's long gone -- but he loves this sound, he loves these songs, he loves this tradition, and, without Rubin keeping him in check, he can indulge in all the bad taste he wants. And so Rebel Soul winds up as a last testament of backwoods, white-trash, red-state rock & roll: Kid Rock sticks to the tried and true, the sounds that always fueled FM rock in Michigan, and he sounds comfortable: not defiant but happy to be where he is, and Rebel Soul is appropriately rebellious and conservative, a dose of old-time rock & roll at a time when the style is starting to fade. ~ Stephen Thomas Erlewine, Rovi