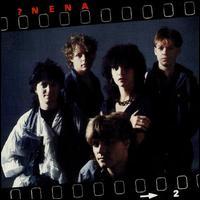 In appearance, the second Nena album again bears typical hallmarks of a new wave act: a shadowy band photo on a black background on the cover and nothing more than a question mark as its title. However, as with the debut album, the music has little to do with actual deconstructionist strategies or new wave's typical intent to disturb. In fact, it is even further removed from that than its predecessor, which was driven by forceful songs and Nena's almost masculine singing approach on that occasion. The opening "Rette Mich" does pick up from there, but the rest of the album contrasts the debut by being much more romantic. Love and longing are the main subjects, with Nena's voice conveying a touching vulnerability that suits the wistful mood of the album perfectly. The music veers even closer to the magical sounds of '70s Baroque rock, which there had also been hints of on the first album. The song structures, however, retain an '80s simplicity, with writing credits spreading out even more evenly between all five bandmembers in various combinations, retaining their general tendency toward classy, beautiful pop melodies. Its tender atmosphere makes it truly special among Nena's albums. The title track, first launched as a surprisingly laid-back single in late 1983, features lyrics by Nena herself about the emotional to and fro (and acceptance) of one's own contradicting desires, and despite its lack of musical excitement, the song took on an anthemic quality for Nena's fans. In Germany, Austria, and Switzerland, the album consolidated the band's stature as the unsurpassable success story of the moment. Moreover, the concentration of the media on Nena significantly drained attention away from the German new wave scene in general, and by year's end there was a consensus that the drive to commercialize new wave in Germany had actually finished it off as a genuine movement. After the album's release in February 1984, the band found themselves extremely in demand, since it coincided with the surprise Top Ten success of the year-old "99 Luftballons" single in America, Britain, and Japan. ~ Alan Severa, Rovi