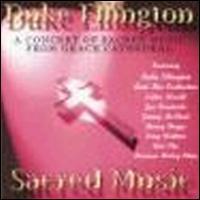 Though Duke Ellington called his first concert of sacred music "the most important thing I've ever done," it might have been more accurately called the most controversial thing he had ever done -- even more so than the so-called "Controversial Suite." The year was 1965; institutions of all kinds, including organized religion, were under fire; even Time magazine dared to run a cover with the legend "Is God Dead?" In response to progressive members of the clergy, jazz musicians like Ellington, Lalo Schifrin, Vince Guaraldi, and a bit later, Dave Brubeck took up the challenge of fusing Christian texts with jazz -- and no project had a higher profile, nor drew more fire, than Ellington's. Conservatives called it a blasphemous attempt to sully religion with jazz; radicals thought it was a sellout on bended knee to organized religion. Yet this first concert, the best of the three that Ellington was to organize in the last nine years of his life, holds up stunningly well today. It's actually a patchwork of this and that from several stages of Ellington's career, going all the way back to "Come Sunday" from "Black, Brown and Beige" (which is heard twice in vocal and instrumental versions) and including material from the 1963 show My People. More than that, the concert taps into Ellington's roots in showbiz and African-American culture as well as his evidently deep religious faith, throwing it all together in the spirit of universality and sealing everything with the stamps of his musical signatures. Ellington's attempt to grab his audience directly by the scruffs of their necks is apparent immediately in "In the Beginning God," where the commanding bass-baritone of Brock Peters describes a primordial universe without modern trappings: "No poverty, no Cadillacs, no sandtraps, no mudpacks...no bottom, no topless...no birds, no bees, no Beatles...." There's even a snazzy number for jazz band, chorus, and tap dancer (Bunny Briggs), "David Danced Before the Lord With All His Might," where "Come Sunday"'s tune appears for the third time. Gospel singer Esther Marrow swings as hard as the band on "Tell Me It's the Truth" and a setting of "The Lord's Prayer" -- and gives "Come Sunday" one of its most soulful treatments on record. The Ellington band still had many of its legendary soloists on hand to testify, including Johnny Hodges, Paul Gonsalves, Harry Carney, Cootie Williams, and returning from the '50s band, Louie Bellson driving hard on the drums. But none of the ingredients would matter in the end if the material wasn't as strong as it is, recorded live in New York's Fifth Avenue Presbyterian Church. ~ Richard S. Ginell, Rovi