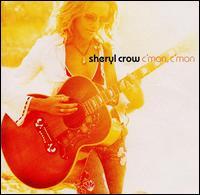 It's hard to call The Globe Sessions a stumble, but its stripped-down, straightforwardness paled in comparison to the dark pop-culture kaleidoscope of Sheryl Crow's eponymous second album. That's why C'mon, C'mon, Crow's long-delayed fourth album, is such a delight -- it's the sunny flip side of that masterpiece, a skillful synthesis of classic rock and modern sensibilities that's pretty irresistible. Crow has turned into the professional she always acted she was -- she not only crafts songs impeccably, she knows how to record them, filling the record with interesting sonic details, whether it's the Steve Miller-styled "woo hoo"s on "Steve McQueen" or subtle Mellotrons on "Over You." That kind of sly sonic adventure was missing from Globe Sessions, as was her predilection for almost-absurd lyrical asides -- check the digital cable reference on the lead single, "Soak Up the Sun," along with its opening line of "My friend, the communist" -- and the return of both makes C'mon, C'mon a delightful return to form. There's so much to enjoy on the surface of the record, particularly in its unashamed glossy sheen and classically structured hooks, that it's easy to enjoy just on that level, yet it also works as a set of songs nearly as consistent and rich as those on her second album. Where Sheryl Crow was a quintessential fall album -- even at its happiest, there was an undercurrent of melancholy and weariness -- this is a record designed for the sunkissed open road of spring and summer. Even when she's singing about heartache, there's an assured sense of purpose, even a swagger, to this album that shines through. Yet it doesn't just work a mood, it showcases her skills at a peak. It's Sheryl Crow at her best, delivering music that is firmly rooted in the past, yet recorded and performed with a modern feel and flair, something that was absent from The Globe Sessions. It's pretty much what the follow-up to Sheryl Crow should have been and what she needed to release for her fourth album, but even better than expected. ~ Stephen Thomas Erlewine, Rovi