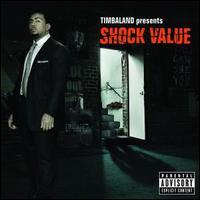 "2 Man Show," the epilogue of Timbaland Presents Shock Value, involves 24 men and women. The title refers to Timbaland and Elton John. John, despite being Elton John, doesn't sing on the song, but he does play some loose piano. Most of the vocals are left to Timbaland, who improvises with a nonstop series of directions, comments, and grunts. He participates in some nonchalant call-and-response singing as well. It's a relaxed way to close an exhausting album, and it's also an odd way to utilize Elton John and a 19-person choir. While the song is an extreme example, it does illustrate the inexplicable and intermittently unpredictable nature of an album that would be more accurately titled Timbaland Presents Slight Confusion or Timbaland Presents an Uneven Mess.

The reigning producer of R&B and rap since 1996, the year of Ginuwine's "Pony" and Aaliyah's "If Your Girl Only Knew," Timbaland has amassed piles of ingenious and commercially successful releases. Due to his work on Nelly Furtado's "Promiscuous" and Justin Timberlake's "SexyBack," two of the least-avoidable pop singles released in 2006, his profile has never been higher. Consequentially, there has never been more anticipation for one of his own albums. His three albums with sidekick Magoo, in addition to the solo-proper Tim's Bio, each had measurable amounts of hype around their release dates. A new level of visibility, combined with a lot of eclectic star power and a couple silly beefs, has turned Shock Value into a major release.

If you haven't read any interviews with Tim from the past few years, or if you missed some of the more telling hints, such as his work on Brandy's Coldplay-sampling "Should I Go," there could be some shock involved while listening to the album for the first time. Although he has continued to contribute beats for MCs -- Young Jeezy's "3 a.m.," Snoop Dogg's "Get a Light," and Redman's "Put It Down" are a few recent examples -- Tim has frequently said that he is bored with rap and into rock, and here he takes the opportunity to reach beyond R&B, rap, and straight-up pop. "Throw It on Me," with the Hives (a good-time garage rock band from Sweden), is a frisky, careening number that must have taken all of ten minutes to put together. A remix of "Apologize," a ballad by OneRepublic (a band that might soundtrack the next season of Grey's Anatomy, or the imaginary annex between Abercrombie & Fitch and The Gap), incorporates an unobtrusive Timbaland beat and some distant vocal accents. With She Wants Revenge (a bad-time faux-British synth duo) and Fall Out Boy (you probably know about them), Tim is an interloper who takes part in songs that wouldn't be worse off without his presence. It's most jarring to hear him as a temporary member of the typically sullen She Wants Revenge, where his downcast verses give way to Justin Warfield's heavily affected drone.

The four songs involving the rockers are the only ones that have the potential to shock, and they're bundled together during the last quarter of the album, so it's not as if they're even being emphasized. Otherwise, Shock Value is similar in setup to Diddy's certifiably flawed and maliciously (and/or unjustly) panned Press Play, a sprawling but often pleasurable album involving so many MCs, singers, and studio hands that a head count would rival that of the sessions for "We Are the World." Tim, along with super-talented associates Danja and Keri Hilson, are some of the common links between the two albums, which share a similar balance between rap tracks heavy on mostly empty grandstanding, pop-R&B songs with male-female exchanges, and a couple club-oriented surprises that go outside the norms of modern rap and R&B. So, in a number of ways, Shock Value can be viewed a sister release to the Diddy album.

Like Press Play, many of the album's key performances come from the females. Hilson, a songwriter, arranger, and singer who has also had a hand in Mary J. Blige's "Take Me as I Am" and Omarion's "Ice Box," is central to three of the album's most memorable songs. "Miscommunication" is the greatest of the three, where she delivers one of the most advanced hooks of the last several years. She took pity on a pathetic fellow (played by a temporarily humble-ish Timbaland), was repaid with a stifling relationship that went too far, and comes up with a disarming way of saying "You're killing me." A completely unnecessary ear-sore of a closing verse from Tim's brother Sebastian does little to harm its effect.

"Bounce," one of Tim's toughest and most sinister beats, is offset by comically over-the-top wordplay from Missy Elliott and Dr. Dre, along with an equally ridiculous appearance from Justin Timberlake ("Like your ass had the hiccups/Like we was riding in my pickup"). Missy outdoes the guys, entering with "Hold up, hell naw/Like Britney Spears, I wear no draws." The rest of the verse is Missy at her lewd best, nothing new yet still 100 percent capable of keeping the testosterone level in check. Even though it's very possible that the involved recorded their parts in different studios, you can imagine them in fits of laughter while trying to top one another's outrageousness. The track is where the blast had by Tim and company, detectable throughout the majority of the album (a saving grace), is at its most contagious.

When the album doesn't sound like a blast is being had, Tim's rhymes are usually within close proximity. They tend to leave a stale aftertaste. As with Jay-Z's Kingdom Come, listening to unrelatable boasts about extreme commercial and financial successes can get tiresome fast, especially when self-satisfaction wipes out any sense of hunger or passion. He brags about making half a million for a beat, and then, a few tracks later, the figure is a quarter of a million. Either he makes too much money to count, or his ghostwriters didn't compare notes. And while he is a competent enough MC to hang with the guest verses -- including low-wattage turns from 50 Cent and Tony Yayo, along with relatively engaging appearances from Attitude, D.O.E., and Magoo -- he's much more effective when restricting himself to incidental goading and singing that merely glides over the beat.

Beyond the Elton John feature, the flat-out puzzling moments are limited, yet they certainly add to the album's lack of sturdiness. Bearing a heavy resemblance to Ciara's "Promise," "Fantasy" was produced by Walter "Lil' Walt" Millsap with Boss Beats and bears no credit to Timbaland. It's also the only song on the album where vocals are provided by one person. "Release," strangely placed third on the album -- just after lead single "Give It to Me" -- is a tossed-off house track, just as much of a Basement Jaxx rip as Basement Jaxx's own "U Can't Stop Me" (off 1999's Remedy) is a rip of Tim and Missy Elliott's earlier hits together.

Shock Value would be less of a hot-and-cold affair with a couple more songs in the vein of "Give It to Me." A leisurely club track full of swagger, it is immediate enough to connect on the first listen, while Tim also sneaks in enough subtle layers to make it increasingly insidious with each play. This song isn't lacking bizarreness or complications, either. Furtado's words are benign enough, but it's evident that Timberlake is taking an ignorant shot at Prince, while Timbaland (despite claiming that he is not targeting one specific person) is most likely referring to one-man beat factory slash opportunist Scott Storch. These are two of the most pointless beefs in the history of pointless beefs, so the details needn't be recounted. It is worth noting, however, that "Give It to Me" provoked Storch to record a laughably inept response track. Regardless of Shock Value's missteps, Tim's track record says all that is necessary. ~ Andy Kellman, Rovi