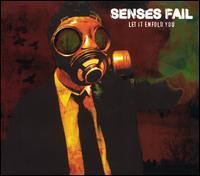 Let It Enfold You [Bonus DVD]

The screamo/melodic hardcore/post-hardcore field was undeniably crowded at the end of the '90s, and it became even more crowded in the early 2000s -- a time that saw the rise of countless screamo bands in the United States. One of them was Senses Fail, whose first full-length album, Let It Enfold You, is full of the swirling guitars, introspective lyrics and clean vocals/screaming vocals contrast that screamo bands are known for. Screamo, theoretically, is meant to serve as a bridge between hardcore and emo; some screamo units have a metallic urgency and end up sounding more hardcore than emo, whereas with Senses Fail, it's just the opposite -- Let It Enfold You is really an emo disc that incorporates some screaming. The clean vocals definitely have the upper hand, and these New Jersey residents are consistently pop-minded. Take away the screaming vocals, and Senses Fail wouldn't be radically different from Jimmy Eat World, Good Charlotte or the Promise Ring. Of course, there are numerous other screamo bands doing this type of thing -- bands that favor an emo/hardcore blend and end up sounding a lot more emo than hardcore. And on Let It Enfold You, Senses Fail doesn't bring anything new or different to the table; originality isn't a high priority on this album. Nonetheless, most of their material is catchy enough ("Lady in a Blue Dress" is arguably the CD's best song), and Senses Fail does have a knack for coming up with intriguing song titles -- for example, "The Irony of Dying on Your Birthday," "NJ Falls Into the Atlantic" and "Rum Is for Drinking, Not for Burning." Neither the best nor the worst that screamo has to offer, this CD isn't remarkable but is a generally competent, if derivative, effort from the New Jersey outfit. [The 2005 reissue contains new cover art, five bonus tracks and a bonus DVD of live footage and music videos.] ~ Alex Henderson, Rovi