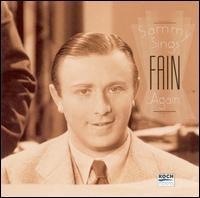 This album's 1999 predecessor, Sammy Sings Fain, also prepared by The Library of Congress Songwriter Series in concert with Fain's son, contained many more of the songwriter's big hits; this disc "blends familiar songs with some of his more offbeat creations," as the liner notes acknowledge. It is assembled from airchecks, live recordings from such sources as Fain's 1978 appearance at the 92nd Street Y's Lyrics & Lyricists series in New York, demos, private recordings, and even one newly recorded performance, "The Dickey Bird Song," sung by K.T. Sullivan. Most of the performances are by Fain himself, although Vincent Price talks his way through "If These Walls Could Talk," a song for an aborted TV series. Fain has a lilting tenor that benefits from his experience in vaudeville and his enthusiasm in singing his own material. A few of his standards are included, notably "You Brought a New Kind of Love to Me," "That Old Feeling," "I Can Dream, Can't I?," and "I'll Be Seeing You," the last in a different version from the one used on the first album and featuring the introductory verse. But most of the songs are lesser-known ones from Fain's many films and musicals, sometimes presented in early versions with different lyrics from the ones eventually used, and there are quite a few outright obscurities. "Fain's demo performance is the only evidence of this song yet discovered," says a sleeve note about "The Snowman's Got a Sweetheart." For show tune buffs, the result is perhaps not a treasure trove, but certainly a pleasant grab bag. This is not an album for someone seeking Fain's "greatest hits," but as an aural document in the history of 20th century songwriting, it's invaluable. ~ William Ruhlmann, Rovi