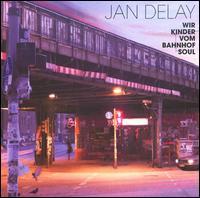 Jan Delay reinvented himself on his second solo album, Mercedes-Dance (2006), adding a newfound taste for soul-funk to his already well-established reggae-rap style, and it took him to the top of the charts in Germany. That album's big hit, the über-funky "Klar," is the direction in which he takes his third full-length solo studio effort, Wir Kinder vom Bahnhof Soul, an album on which he and his band, Disko Nr. 1, indulge their passion for the disco-funk sounds of the late '70s. Echos of Chic, Prince, Earth, Wind & Fire, Parliament-Funkadelic, and other such acts pervade Wir Kinder vom Bahnhof Soul and make it something of an exercise in nostalgia for the days when actual bands (rather than machines) kicked out the jams. The reggae-rap style of Delay's first album, Searching for the Jan Soul Rebels (2001), is little heard here. While that might disappoint some of his longtime fans hoping for a return to form, there's otherwise nothing to complain about on Wir Kinder vom Bahnhof Soul, a Deutsch funk effort par excellence that should propel Delay's popularity to new heights, in particular the fantastic lead single, "Oh Jonny," with its handclaps, horn blasts, backup vocals, and catchy hook. As easy as it is to get swept up in the disco-funk grooves and throwback spirit of Wir Kinder vom Bahnhof Soul, there's an undercurrent of social commentary that makes this more than just party music. For instance, the album's title ominously harks back to Christiane F. - Wir Kinder vom Bahnhof Zoo (1981), a harrowing film based upon the real-life story of a German teenager who gets caught up in the West Berlin disco scene of the late '70s and ends up a junkie prostitute. By and large, however, Delay dishes out his societal observations in an easygoing fashion and demonstrates a good sense of humor throughout. "Oh Jonny" is a good example of this. It helps also that he closes the album with "Disko," a song purely about dancing and partying that brings Wir Kinder vom Bahnhof Soul to a climactic finale that leaves you feeling a bit breathless. It all adds up to a fantastic album that is not only a blast of fun but also smart and stylish. ~ Jason Birchmeier, Rovi