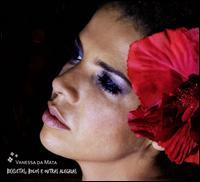 After achieving star status in Brazil with the radio-friendly Essa Boneca Tem Manual, and breaking into the international circuit by rubbing elbows with Sly & Robbie and Ben Harper on the Latin Grammy winner Sim, Vanessa da Mata's fourth studio album, Bicicletas, Bolos e Outras Alegrias, finds her finally enjoying the rewards of her hard work. Freed from the pressures of having to make a name for herself, da Mata has grown in both confidence and independence, launching her own label and writing ten of the album's twelve tracks entirely on her own; the two co-writes were with Lokua Kanza and Gilberto Gil. Bicicletas may initially seem to be less striking than previous da Mata records, but only because she is no longer the exciting new face on the scene. If anything, this album confirms that she is not just a pretty flash in the pan, but one of the leading artists of her generation. Moreover, this is arguably her first release to build on the foundations of her last work, rather than attempting some considerable reshuffling in search of her yet another musical identity. Accordingly, Sim's reggae-tinged vibe shows up on at least half the songs here, processed the Brazilian way in the manner of say, Paralamas do Sucesso, or, more accurately, Olodum. But the difference is that Bicicletas is a vocal- and bass- centered album, rather than guitar or percussion. Another key link between Bicicletas and Sim is the return of multi-talented producer Kassin who, together with partners Moreno Veloso and Domenico, have become a formidable think tank off left-field creativity in the contemporary Brazilian scene. The choice of a maverick like Kassin over the more commercially oriented Liminha is mirrored in the choice of Sean O'Hagan (Fatima Mansions, High Llamas, Stereolab) as the album's overseas guest. More of a cult name rather than a household one, O'Hagan is nonetheless capable of delivering the kind of string arrangements that this elegant album needed. Repeat listening reveals a coherence to Bicicletas that was not always apparent in da Mata's earlier work. While no track stands out in the same way her hits did on her earlier albums, the entire first half of the disc is superb, from the delicate "O Tal Casal" to the saucy "Fiu Fiu"; from the funky "Meu Aniversário" (reminiscent of Caetano Veloso's "Eu so Neguinha," previously covered by da Mata), to the gentle reggae of "Vê Se Fica Bem" and "As Palavras." Da Mata's lyrics are generally life-affirming (but rarely trite), featuring equal doses of humor and tenderness, and take a few jabs at consumerism and female stereotypes, but it is the purity of her voice that carries the day. As with all the great Brazilian female singers, she is seemingly capable of singing, sighing, and smiling all at the same time, resulting in the marvelous paradox of a sound both ethereal and deeply sensual. The very last song of the album, an acoustic guitar duet with Gilberto Gil (that sounds unmistakably like one of Gil's unspeakably beautiful compositions) is a fitting conclusion to yet another impressive success by da Mata, but also serves as a reminder that she is still not quite on that level as a composer; in truth, few people are. But she certainly has earned the right to, at the very least, share the stage with the true greats. ~ Mariano Prunes, Rovi